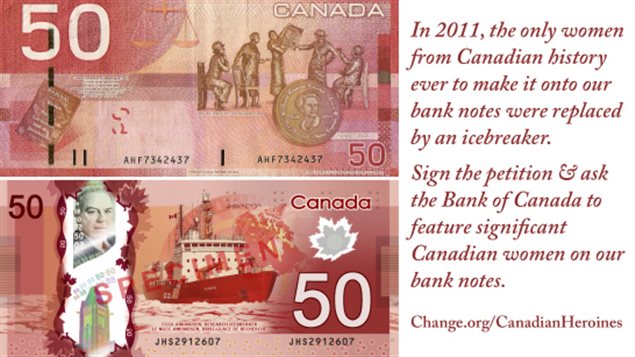 The colour is the same, but the two different images motivated historian and writer, Merna Forster to start a petition. 48,000 Canadians have signed it so far.
Photo Credit: Merna Forster

Canadian currency features just one well-known woman, and she is not Canadian.  Queen Elizabeth II, our head of state, is on most coins and bills, but Merna Forster, and 48,000 other Canadians want that to change.  They want to see other women honoured for their significant contributions to Canada.

This all began with the new series of polymer banknotes, issued in 2011. They rolled out into use over time, from the hundred dollar bill down to the five dollar bill in 2013.  This replacement series was troubled from the start.  The plastic polymer surface was a problem for vending machines, they were said to melt in strong heat, and former Bank of Canada Governor, Mark Carney, was obliged to apologize when it became known the bank had changed the Asian features of a female scientist on the prototype of the new $100 bill, following questions about her ethnicity from focus groups.

But it was the fact that the altered and anonymous woman was the only one left on the new Canadian currency that bothered Merna Forster.  Many Canadians had become accustomed to the Famous Five, and Quebec feminist activist, Therese Casgrain, featured on the back of the red fifty dollar bill.  They disappeared in the new Canadian series, dedicated to distinguished Canadian Prime Ministers, and in the case of the fifty, replaced by an icebreaker.

Merna Forster is a historian and author of, ‘100 Canadian Heroines:  Famous and Forgotten Faces‘.  She is also the woman behind the on-line petition to have the Bank of Canada commit to including women on our currency.  The site is at, womenonbanknotes.ca.

Merna Forster says women on banknotes in 2014 is not novel.  She lists several countries such as Japan, Venezuela, Peru, Columbia, Mexico and Turkey, to name a few, that all feature at least one woman.  She says Australia may have done it best, featuring a man on one side and a woman on the other, of four of their bills.

Some people say to me, oh this is not a significant issue, well it’s a symbolic issue, it’s important and something needs to be done about it.

In Britain, ironically, it was Mark Carney, who settled a similar debate and was featured in all the positive publicity surrounding the decision to put classic writer Jane Austen on the ten pound note.  She will make her debut in 2017.

The Bank of Canada has undertaken an on-line consultation with Canadians that ends November 10th, in an effort to hear what people would like to see on the next series.

While the Bank has established design priorities that include greater diversity, Merna Forster wants to have women specifically included.  She regularly shares with the Bank of Canada what Canadians are telling her on-line,

It is worth noting, however, that while we may not have enough female images, we will soon have a female signature on our currency.  Carolyn A. Wilkins was appointed Senior Deputy Governor of the Bank of Canada this past May. Her signature will be rolling out on the next series of twenty dollar bills, during the first half of 2015.