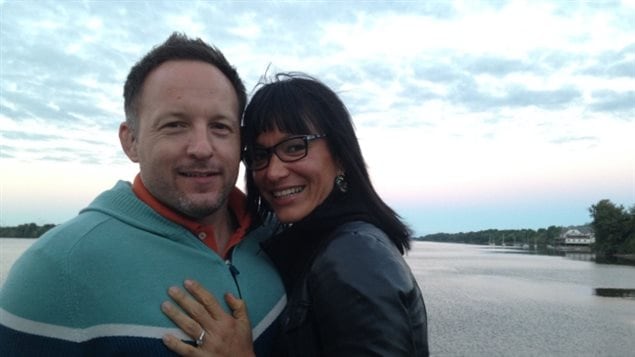 Waneek Horn-Miller and her partner, plan to return to Kahnawake to raise their family.
Photo Credit: CBC

Waneek Horn-Miller is one of seven people suing the Kahnawake Mohawk Council over eviction notices due to their “mixed-race” relationships.

An athlete, Horn-Miller was co-captain of the Women’s water polo team at the Sydney Olympics in 2000.  She was informed she will have to leave the community by May of 2015 because her partner is not Mohawk.

A ruling in 1981, that became known as ‘Marry Out, Stay Out’, was never really enforced.  But it has been a simmering issue over the years.

In 2010 eviction notices were sent out, and Grand Chief Michael Delisle explained the move at the time to CBC News.  “All we are trying to do is preserve, not only culture and language and identity, but who we are as a people.  It needs to be controlled by us, not by outside entities.”

Recently the band council held consultations and discovered that a majority of the community of about 6,000 people, support the law.

Waneek Horn-Miller, now a native rights activist, was stabbed by a Canadian soldier during the Oka Crisis in 1990.  She was 14 at the time.  She speaks to native youth all over North America, inspiring them with her experience of overcoming trauma.  Now she is in a battle to be able to raise her children in the place she calls home.

In a recent interview with CBC News, Horn-Miller said, “To support the growth of the Mohawk nation is always my intention.”

But it is becoming more challenging as the issue becomes increasingly divisive.  In 2010 Horn-Miller, then eight-and-a-half months pregnant, received an anonymous petition, signed by 60 or her neighbours, demanding she leave the community because of her relationship with a non-native.

At the moment she is living in Ottawa while her partner, Keith Morgan, completes his medical residency.  Originally from Calgary, Alberta, he is also a former Olympic athlete who competed in judo.

Waneek Horn-Miller described the rejection to CBC News recently, saying, “It’s heartbreaking, and that doesn’t even chip away at the surface of how I really feel.”