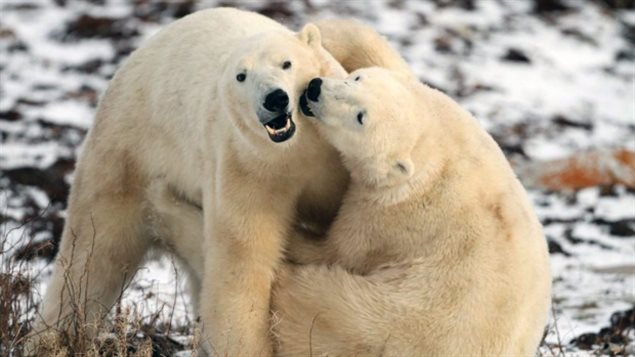 Web-cam photo of two bears near Hudson Bay wouthwestern shore in Manitoba. A polar bear's range may be in the thousands of kilometres and they have eveolved a unique way of finding each other, essential for breeding. That may be threatened by climate change
Photo Credit: explore.org

The pheromone feet of polar bears

Polar bears have given new meaning to sexy feet. Scientist had heard of anecdotal reports that polar bears sniff the tracks of other polar bears and will often follow those tracks but may prefer one track to another.

They speculated that there was something in footprints with gave information to other polar bears.

Megan Owen, of the Institute for Conservation Research at Zan Diego Zoo, California, in the US, and colleagues from Polar Bears International and the US Geological Survey, decided to investigate.

They had samples collected of the scent left by the feet of over 200 wild polar bears in the Arctic. They found pheromones and other chemical traces which bears could identify even in minute amounts and over lapses of time.

They offered the scents to 10 adult male and 16 adult female polar bears in zoos, some wild and some captive-born.

The zoo bears were more interested in scents left in the spring, and male bears especially interested in the scent of female bears, and even more so the ones in oestrus.

The also examined the paws of two female bears and discovered prominent sweat glands in the pads which could be used to communicate chemical information about such things as sex and physical health.

Steven Amstrup, is a chief scientist with Polar Bears International. He says the bears have evolved this very unique method of attracting mates to fit their environment. He also expresses concern that climate change which means less ice and more broken ice may not be able to leave continuous trails and so prevent them finding each other in future, thereby threatening breeding.