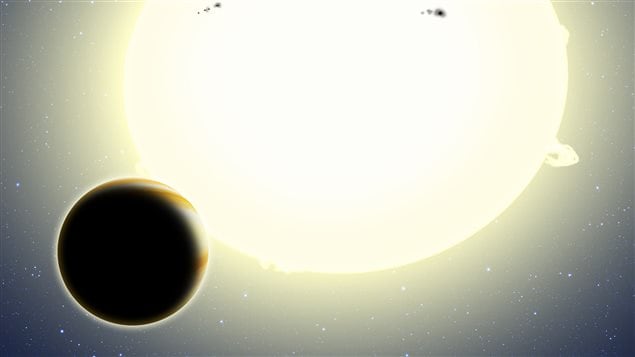 Artist’s conception of new exoplanet. Scientists cannot physically see the planet, but rather detect it's presence ans size by the variation in light from the star as the planet passes thel ine of sight between the distant star and Earth.
Photo Credit: courtesy of Harvard-Smithsonian Centre for Astrophysics

Canadian researchers have confirmed the existence of an exoplanet, a planet outside our own Solar System, that might be a “waterworld”.

Jaymie Matthews, PhD,  is a Professor of astronomy and astrophysics at the University of British Columbia, the Mission Scientist in charge of the MOST Space Telescope Project, and a member of the Executive Council for NASA’s Kepler Mission. He and his team helped confirm the exoplanet’s existence.

The newly discovered planet bears the name HIP 116454 b. It circles a sun about 180 light years away from Earth.

It’s classified a “super-Earth”. To exoplanetary scientists, the “super” means only that it’s bigger and more massive than the Earth but not as big as a giant planet like Jupiter.  There are no planets in this size range in our Solar System.

Based on the mass and size (11 times the mass and 2.5 times the diameter of Earth), this planet may be composed of about 75% water and 25% rock.  Another possibility is that it is a miniature version of the ice planet Neptune, but with an extended atmosphere.

As to the significance of such discoveries, he says that other planets help scientists learn about our own planet..

He also notes that ongoing surveys of exoplanets indicate that, when one small planet is found around a star, there are often others.  The hunt is now on to determine if there may be an Earth-like planet orbiting the star HIP 116454, including the possibility of one in the star’s “habitable zone”.