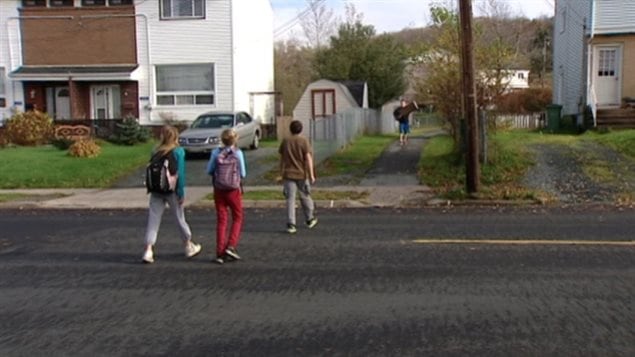 We do it without thinking. If we see an object in front of us, but then turn our eyes and body left to look down the street, our mind remembers the image of the pathway and pole and moves it appropriately across a short-term visual memory map so we instinctively know it is now 90 degrees to the right of our eyes, even though we are no longer looking at it.
Photo Credit: CBC

It’s something we do without ever thinking about it. It’s a short-term “visual memory map” of where things are in relation to our bodies and where we are currently looking, even as we shift our vision and bodies away from the object.

It’s a groundbreaking study, and an important step in understanding how our brains work. The study was supervised by Doug Crawford (PhD). He is the Canadian Director, Brain in Action IRTG, Canada Research Chair in Visuomotor Neuroscience, Distinguished Research Professor in Neuroscience in the Faculty of Health, and is a member of the York University Centre for Vision Research in Toronto Ontario.

The study published in the latest edition of the online science journal Current Biology-Cell,  has a complex title,  Continuous Updating of Visuospatial Memory in Superior Colliculus during Slow Eye Movements

What Professor Crawford’s team discovered was that the brain has visual short-term “map” which is constantly being overwritten as we move or look around.

Professor Crawford cites the case of a football quarterback who quickly sees an alternative receiver 4 metres and at about 80 degrees to his right but then looks downfield for a long distance catcher. He spots one and tracks him with his eyes, but then he is threatened with being tackled before he can make the long pass. Fortunately, his visual memory also kept track of where the alternative receiver is even before he turns to see him, giving him that extra few milliseconds to prepare the throw to the right location.

The York research team found this visual mapping located in an ancient area of our brain development called the midbrain superior colliculus.

“As the eyes move, activity related to the remembered target travels across the ‘visual’ cells in the midbrain superior colliculus, constantly keeping track of its location relative to the direction the eyes are currently pointed,” explains Professor  Crawford,  “In our football example, when it’s time to aim an eye movement and then make a pass toward the open receiver, the visual memory is transferred to motor cells which then produce a burst of activity.”

The research, led by postdoctoral fellow Suryadeep Dash, also suggests that continuous updating of signals could emerge in other visuomotor areas of the brain.

Professor Crawford says, “Studying this system might help us understand how we remember where things are during other continuous motion behaviors such as walking, driving or general navigation.”

He notes there may also be clinical implications in understanding some disorders like schizophrenia, where patients may have trouble distinguishing between real events and internal events in their brain, whether they are thoughts or the movement plans used to keep track of visual memory. Degradation of these visual memory processes might also explain some aspects of senile dementia, where both spatial memory and navigation are affected.