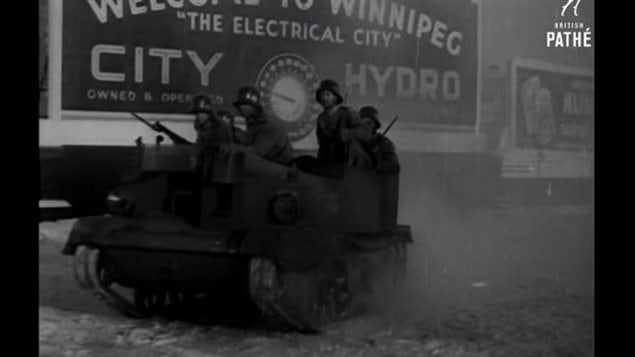 The first warnings came on the 18th of February when warplanes painted with German insignia flew low over the major western Canadian city of Winnipeg, and its surrounding towns in Manitoba.

In the town of Selkirk, just north of Winnipeg, a blackout that night occurred with the sound of explosions from dropped bombs.

The next day in Winnipeg, residents awoke to find German soldiers in the streets, and the radio broadcasting German messages. Gunfire was heard in the streets. Anti-aircraft guns fired into the sky and more explosions from bombs were heard.

The raid which had begun before dawn, was successful by 0930. The Royal Union Flag at city hall was taken down, and the Nazi flag was raised and a German victory parade was later held.

The Second World War for Canadians and the Empire had already been underway since 1939. By 1942, tens of thousands of Canadians were already overseas in the infantry, armoured units, air force, and serving in the Navy and merchant marine ferrying supplies to the war effort.

Working around the clock, Canadian factories were churning out planes, ships, tanks, guns, shells, trucks, radios, uniforms, medical supplies, food, and anything and everything possible for the war effort.

In Winnipeg however, people awoke on February 19th to an entirely different day with thousands of troops in the city in German and Canadian uniforms.

The whole thing was a giant staged event to raise money for the Second Victory Loan campaign.  The regional branch of the National War Finance Committee organized “If Day” as a way to bring the war home to people not really affected by it, and by raising awareness, increase the sale of Victory Bonds.  The idea being that “If” the allies didn’t win the war, this would be the result.

It became the largest military exercise in Canada to date with some 3,500 soldiers defending the city against the “invaders” also soldiers and volunteers from the Young Men’s Board of Trade using Nazi uniforms borrowed from Hollywood.

Even though the event had been advertised and word had been spread via radio, many people were still caught off guard and thought it was a real invasion, at least for a short while.

The event was extremely elaborate with, the planes, the AA-guns, and rifle fire (all blanks), even with a fake edition of the Winnipeg Tribune printed, mostly in German, and with German money printed (with an advert for Victory Bonds on the back)

Pre-selected old and damaged books were burned in an event in front of a library,

At the end of the day, the “prisoners” were released and organizers and others marched down the main street with a bonner reading  “It MUST not happen here!”

The result was a rousing success with Victory Bond sales well over Winnipeg’s target at $3.2 million, the largest one day sale, and the city’s target of $24 million was reached only a few days later, while the provincial target of $45 million was easily surpassed at $60 million, all attributed to “If Day”

The event was also covered by many American news services including Life Magazine, Newsweek, New York Times, and others. Newspapers as far away as New Zealand also carried coverage of the event.

In 2006 a documentary was made of the event by Past Perfect productions, and clips were included in Guy Maddin’s film “My Winnipeg”