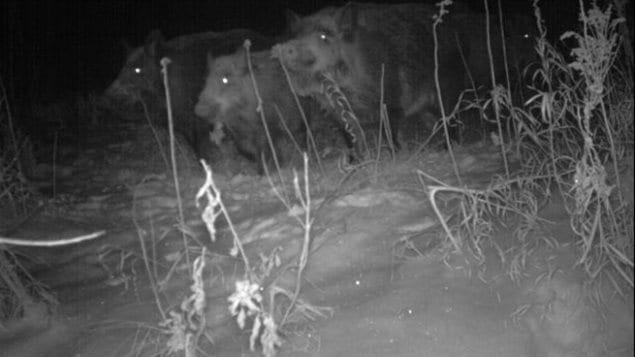 Despite their growing numbers, wild boars are difficult to track during the daytime. They can grow quite large, and if cornered, can be dangerous.
Photo Credit: Wild Hog Watch)

The large fur-covered and tusked animals were introduced to the province from Russia as exotic livestock in the 1990’s as part of a farm diversification programme.  Some later apparently escaped into the wild where they have adapted easily to Canadian conditions.

A fast rate of reproduction and ability to eat almost anything meant that the population of feral boars has been rising quickly. Adult males can weigh between 90 and 120 kilograms and with their tusks, can be quite aggressive if cornered. They are also very wily, learn quickly and generally nocturnal if they learn there is danger in daylight exposure, as in hunting.

In 2013, University of Saskatchewan biologist Ryan Brook , a professor in the Department of Animal Science, conducted a study of 296 rural municipalities and found evidence of the wild boars in at least 70 of them and reported sightings in 111 municipalities.

“Certainly, the biggest concern I would have is the potential for disease transmission,” said Ryan Brook, a professor in the Department of Animal Science at the University of Saskatchewan. He added, “There are quite a number of important pig diseases to be really worried about.”  He is also quoted saying the wild boars are an “ecological train wreck”.  Farmers have also said the groups of wild pigs can terrorize livestock.

Indeed, for several years now warnings have been raised about the rising population of the animals. Wild boar are believed to have some of the highest reproductive rates of all large mammals, with two litters a year of six or more piglets at a time. They can also be quite big, with an adult male ranging from 100 to almost 200 kilograms

Ryan Brook says within a decade, if unchecked, the wild swine population could exceed the provincial population of 1.1 million.

“Certainly, the biggest concern I would have is the potential for disease transmission”, he said.

About 30 viral and bacterial diseases can jump to humans or livestock from feral boars, including E. coli, bovine tuberculosis and footand- mouth disease.

The Conservation group, Nature Saskatchewan is also becoming very concerned.  Jordan Ignatiuk, executive director of Nature Saskatchewan was quoted last year in the Western Producer  saying “The nature of their character is the rooting behaviour. One particular place that they can be really bad is in wetlands, so they’re rooting out the cattails to eat the tubers. So they can devastate a wetland in pretty short order if suddenly you get a group of 12, 15, 20 pigs in there.” They have also been known to destroy nest, chicks, and eggs of birds in the wetlands.

Since being declared a pest in the neighbouring province of Alberta in 2008, Alberta officials have introduced tighter restrictions on wild boar fencing systems — to be in place by 2018 — and a bounty on animals in the wild.  That bounty, which provides $50 for a pair of wild boar ears, has seen hundreds of animals killed and has been extended through 2017. On the other side of Saskatchewan, the entire province of Manitoba has been declared a wild pig control zone.