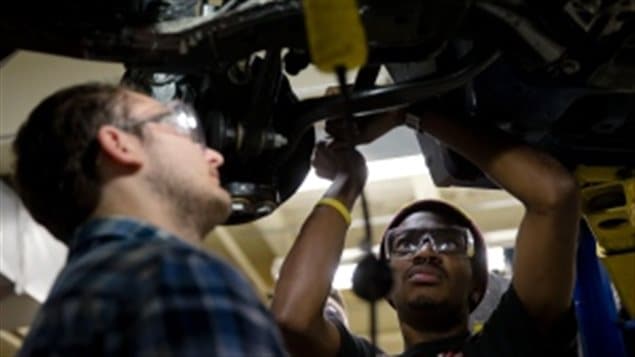 Students at a community college work on a car's engine. Too many families and students have a bias in favour of universities over colleges, new report claims.
Photo Credit: AP / Matt Rourke

Universities should cut enrolment by 30 percent while colleges increase: study

Ken Coates, a professor at the School of Public Policy at the University of Saskatchewan and Canada Research Chair, Regional Innovation, is recommending that university enrolment be cut by 30 per cent, to the benefit of colleges and technical schools.

He makes these points in a study commissioned by the Canadian Council for Chief Executives.  Ken Coates says the Council has been looking into the training debate in Canada, in light of skills shortages within the country and having to bring in people from abroad to fill the needs, while so many here remain under-employed.

He says back in the 1960’s, 20 to 30 western countries had a hold on university education.  He says the advantage that we formerly had in producing higher educated people has evaporated with the development and promotion of university in places like China and India.

“We’ve got a disconnect between how we’re funnelling people into the university system  global and the actual nature of the global economy.”

He also points to the current reality wherein Canada is second, behind Span, in having the highest rate of under-employed university graduates.  He says “we’ve got a disconnect between how we’re funnelling people into the university system  global and the actual nature of the global economy.”

“We’ve sold our students, and we’ve sold ourselves quite frankly, on this mythology of a knowledge-economy where you had to have 16 years of education, a full degree beyond high school if you were to compete in the fast-moving internet-driven age.  What we’ve got instead is a specialist economy where employers are looking for very particular people with very particular skills and that’s not how our system is set up and more importantly, that’s not how our expectations are set up.”

In Ontario there has been a 40 per cent increase in the number of people with university degrees going back to college for skills training.  And while a higher education is never a waste, Coates says “so-called blue-collar bias” in many families is muddying the waters.

One of the solutions, he says, is to have business leaders and governments speak more openly about the range of career-opportunities that do exist, and have teachers broaden the horizons they project on the children;  talk of university as the one destination post-secondary is not serving the students or Canadian society.

Ken Coates says flexibility is the only real strength you have, along with, and perhaps more importantly, excellence. He says for most of our post-war period mediocrity or average ability was fine for the factory and resource-related labouring jobs we once had.  But they don’t exist now.

He says we suffer from the fact that we don’t have a national system of education, so we have a variety of systems that serve their regions with varying degrees of success.

Coates says we Canadians have an obsession with accessibility: everyone must have the right to go to university.  He says he is of the mind that people should have to earn the right to have these remarkable opportunities.