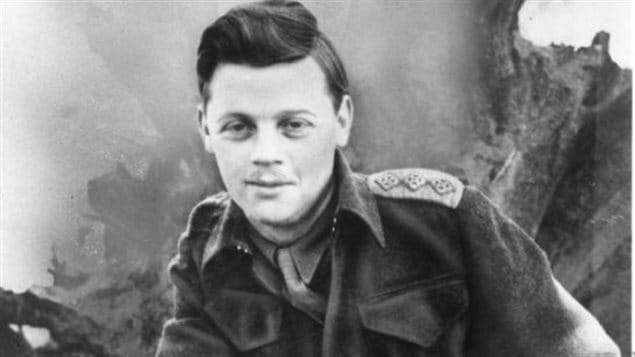 Farley Mowat who accompanied Maj Ken Cottam on a risky venture, that worked to save many Dutch lives. He is pictured in San Leonardo di Ortona, Italy, on Dec. 10, 1943. Mowat would later write of his wild military career, among several other fiction and non fiction books, many of which have been translated into some 20 languages.
Photo Credit: .G. Whitcobe - Public Archives Canada

History-April 27 1945: The crazy trio who helped a starving war-torn Holland

It was really quite mad.

Throughout April1945, vicious fighting had been taking place as Canadians pushed across Holland, retaking city and village from the desperate but still determined German Army. Along the way, they encountered starving Dutch who were resorting to eating tulip bulbs, dead horses and really anything they could.

Then from the Dutch resistance a somewhat nebulous message came into Canadian intelligence offices allegedly from the German Command in Holland. It said the German Commander, Gen. Blaskowitz wished to speak to the Canadians about the desperate food situation of civilians in German-held territory.

Upon receiving the vague message at Intelligence headquarters,  two basically junior officers, British-born Major Ken Cottam and Canadian Captain Farley Mowat, both of whom can best be described as “colourful” characters, and who already had a well-established reputation of never doing things “by the book” decided after discussing the situation with Canadian HQ, that they would personally go see what it was all about.

On April 26, accompanied by Sgt. “Doc” MacDonald, Mowat’s orderly and assistant, they took off in a lone jeep and headed toward German-occupied Holland in what should have been seen as an extremely risky, and foolhardy mission. If it had been in film, no-one would believe it.

Still, with a completely mad sense of adventure and a large white sheet flying from the wire cutter on the front of the jeep, the two officers and Sgt. MacDonald, roared off toward German lines. Mowat later would say that he thought they would be riddled with machine gun bullets at any time.

Cottam spoke fluent German and armed with bravado, an authoritarian attitude of importance, and the vague message, they actually succeeded in making it past several checkpoints of nervous soldiers, even getting a German motorcycle escort at one point.

Having amazingly survived, they eventually arrived at the large and heavily guarded bunker complex of the German 25th Army HQ and were admitted to see Gen. Blaskowitz.

Late that same night, they had managed to strike a deal with the German forces.

On this day, in 1945, April 27th, these junior officers relayed the message back to their own HQ that they had astoundingly negotiated a truce with the Germans to allow food deliveries to the starving population.  Mowat later said he thought they would either been promoted for their daring, or court-martialed for entering into basically unofficial negotiations with the German command.

As it turned out, neither eventuality happened in spite of the fact that similar negotiations were taking place at the Supreme Allied Headquarters at the highest military level, but the two plucky Canadians had sealed the deal quickly on their own, thereby undoubtedly saving a great many Dutch lives.

On April 29th, the first Lancaster loaded with food made a nerve-wracking flight over enemy territory to test the truce. They made the drop and the crew of seven, five of whom were Canadian, radioed “mission accomplished”.  Regular air drops then began with British and Canadian Lancasters dropping food to the still-occupied areas of the Netherlands, followed by American planes.

When this proved insufficient, convoys of Canadian trucks loaded with food and other supplies were able to pass through German lines to deliver food.

Soon afterward and realizing they were beaten, the Germans in Holland would surrender to Canadian forces within a matter of days.