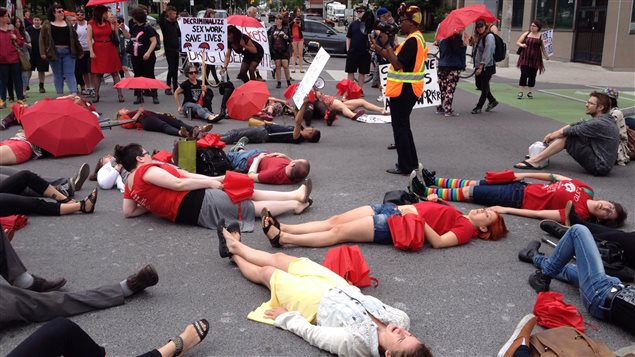 Sex-workers are gathering in Toronto today with other interested parties at a public forum to address growing problems advocates say, are brought on by anti-trafficking campaigns.

Organized by Toronto’s Migrant Sex Workers Project, today’s event will feature speakers, research and artwork in a space at Ryerson University. The artwork was created by offering migrant sex-workers the opportunity to colour in an image of a butterfly, and anonymously tell their story, in their own words, on the back.

Chanelle Gallant is co-director of the sex-work advocacy group, Strut.  She is also one of the speakers. I spoke with her yesterday to find out more about this public forum.

Gallant says in Toronto recently, there were a number of robberies and physical and sexual assaults against Chinese speaking sex-workers who felt they could not go to the police.

And last week in Ottawa, in an anti-trafficking raid, 11 sex-workers were rounded up and are now being deported. Gallant says news of the deportations will further silence alienate migrant sex-workers.

We are concerned about the safety of migrants in the sex trade and we really want to bring together the voices of migrants themselves, research on the issue and build a voice for migrant sex-worker justice.

Chanelle Gallant says new prostitution laws enacted by the federal government are to blame. “The biggest problem with the new laws is that they don’t substantially change the old laws:  they’re basically the old laws re-packaged and made worse.

Bill C-36, The Protection of Communities and Exploited Persons Act, was passed and became law in early December 2014.  “As many have stated, although the new law is supposedly about “protection” of sex workers, it will continue to endanger sex workers’ lives and violate their human rights instead because of its continued criminalization of sex work.  Elene Lam, another sex-work advocate and founder of Butterfly, wrote in a piece last November in Rabble.ca.

Gallant says, “Because people are so concerned about the problem of trafficking they’re allowing all sorts of human rights abuses to happen in the name of stopping trafficking.”

“What happens when we try to criminalize the sex industry in order to reduce harm is that we actually deliver sex workers into the hands of predators, we push it underground and then there’s no protection for workers and so we’re seeing more violence, more harms rather than the opposite.”

So anti-trafficking initiatives are making things worse and more dangerous

“We want rights for the people in the sex industry, labour protections and these are the things that will stop the harms against migrant sex workers.”

“We need things like immunity from deportation for people who are caught up in an anti-trafficking raid.” Gallant explained.