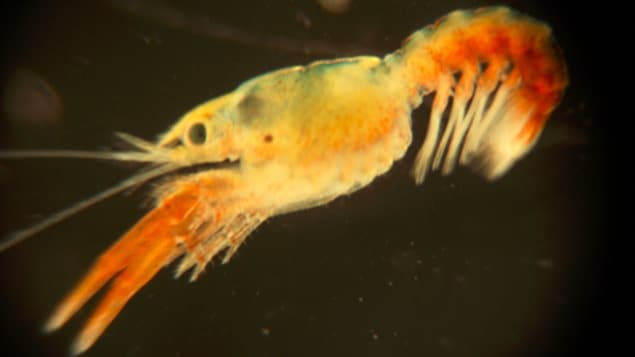 Lobster larvae will grow in environments that will simulate the effects of climate change at Bigelow Laboratory for Ocean Sciences in the U.S. state of Maine.
Photo Credit: Jesica Waller

Climate change is altering the chemistry of oceans and making them warmer, and that may alter the breathing of lobster larvae, says Jesica Waller, a graduate student at the University of Maine.  Waller will come to Canada’s eastern province of Prince Edward Island in September to investigate the effects of climate change on lobsters in the Gulf of Maine, a body of water shared by Canada and the U.S.

“We know now that the Gulf of Maine is getting warmer and more acidic, faster than anywhere else in the world,” says Waller. “So we want to see how these changes in oceanic conditions will lead to any changes in lobster larvae. Lobster is an essential fishery in Maine and Atlantic Canada.”

Preliminary study suggests that lobster in warmer and more acidic conditions grow to the same size and length, but have decreased metabolism, specifically respiration rates. Waller thinks the change in the ocean could affect the lobster’s ability to grow and breathe properly.

“I’m going to be examining if it will affect their ability to swim as fast as larvae raised in today’s conditions and catch prey,” says Waller. “I suspect those may be two areas we could relatively easily measure that might be impacted by a larva that can’t breathe as well as other larvae.”

Waller will be able to simulate the environment of the ocean today and the ocean in 2100 as predicted by the Intergovernmental Panel on Climate Change using the ocean acidification system at Bigelow Laboratory for Ocean Sciences in Maine. She will raise lobster larvae in both environments and use cameras to measure their ability to swim and catch prey.

“We know that climate change is going to change the chemistry of the ocean and the temperature of the ocean so my work and the work of my advisors is to examine what this really means for things that build shells like lobsters” says Waller.

There has been research on shell-building organisms like oysters and clams, but very little on lobsters. The results suggest the effects are different for each species so Waller wants to find out more about how climate change will alter lobsters in the Gulf of Maine.