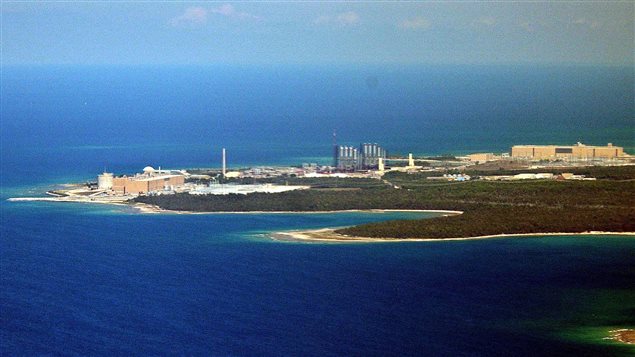 The Bruce Power nuclear generating station in Kincardine in 2003. Ontario Power Generation is seeking approval from the Canadian government to permanently store low- and intermediate-level radioactive waste in a chamber that would be built more than 2,000 feet below ground and less than a mile from Lake Huron
Photo Credit: CP / J.P. Moczulski

The Deep Ground Repository (DGR) proposed for Kincardine in Southwestern Ontario, will be the topic of many conversations over this annual Victoria Day holiday weekend.

As the unofficial beginning of summer, in much of southern Canada, this is the time to open up the cottage, or head to one of the lake shores and beaches along Lake Huron and the Bruce Penninsula.

A kilometre from the shore of Lake Huron

The Bruce power station is the largest operating nuclear power plant in the world, with 4,000 employees drawn from several small communities around it.  The majority here support the DGR, which will store over 200,000 cubic metres of low and intermediate radioactive waste from the Bruce, as well as the Pickering and Darlington nuclear power stations.

But farther away, and in the large urban centres of Toronto, and Chicago, the DGR is the subject of a divisive debate with thousands signing petitions and filing official objections to the proposal. The biggest complaint is the proximity of the DGR to the Great Lakes basin.

At just over a kilometre from the shore of Lake Huron, many fear the future of 40 million people, on both sides of the Canada-US border, could be at stake in the event of an accident or an unforeseen event.

Mayor Keith Hobbs of Thunder Bay, Ontario, a vocal opponent, said in a recent interview with the London Free Press, “If you contaminate that source, we’re done.  That’s life, that’s life itself.”

Mitch Twolan, Mayor of Huron-Kinloss and warden of Bruce County says he sits on the other side of the fence. In an interview with Debora Van Brenk of the London Free Press, Twolan said, “I live in a pro-nuclear community.  I’ve worked up there,  I understand the safety, I understand the whole culture of safety at the Bruce is second to none.”

Gordon Edwards of the Canadian Coalition for Nuclear Safety, says both the location of the DGR, and the vision for the burial of the radio active material pose major problems.  “I would rather call it storage, than disposal.”

“We have in fact created this waste and we are obligated to look after it” says Gordon Edwards.  He says, “This is not just a nuclear industry obligation, this is a societal obligation.  So we believe that we should be looking towards the idea of ‘rolling stewardship’.  Rolling Stewardship is a policy that was put forward by the National Academy of Sciences in the United States a couple of decades ago, and the idea is that we have a commitment as a society to look after this waste and to retrieve it and repackage it whenever it needs to be repackaged, and to make any necessary repairs going along, indefinitely into the future to ensure that this does not contaminate the environment and endanger the health of people.”

The CCNR suggests there should be a twenty year interval, that would allow for a formal changing of the guard, where the next generation of people who will be looking after the waste are inducted and instructed as to what the nature of the waste is and how necessary to make sure that it stays out of the environment.

The federal environment minister, Leona Aglukkaq is expected to announce a decision in September following consultation with Aboriginal communities, most of which, are also opposed the current plan for the DGR.