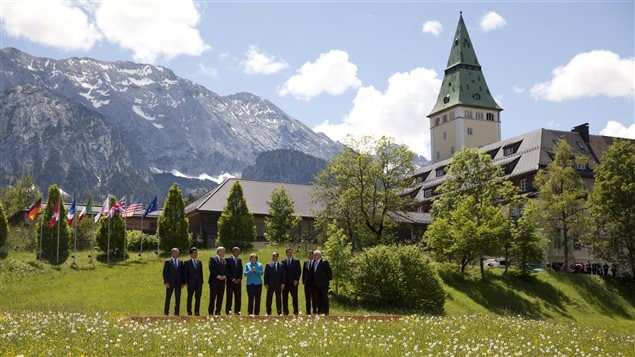 Meeting in southern Germany, Canada’s Stephen Harper and his G7 colleagues agreed to transform their energy sectors to low-carbon sources, but only much later.
Photo Credit: Carolyn Kaster/AP Photo

G7 leaders have agreed to transform their countries to no-carbon economies but not until 2100. As host of the meeting, German Chancellor Angela Merkel had hoped to get agreement on a low-carbon target for 2050.

Canada’s Stephen Harper said Canada’s energy sector will have to transform to reduce greenhouse gas (GHG) emissions, but in the longer term. Obtaining oil from sands is a key driver of Canada’s economy, but the process emits considerable GHG. Harper’s conservative government has failed to set emission targets for the oil and gas sector.

The G7 leaders pledged to develop innovative technology in their energy sectors to curb climate change.