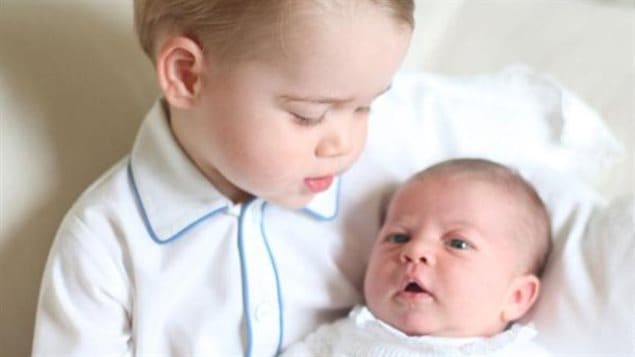 A recent photo of Prince George holding Princess Charlotte released by Kensington Palace. If she had been born first she was to be Queen with a change of law. Now a challenge from Canada puts the Line of Succession into question.
Photo Credit: Twitter / Kensington Palace

Britain’s Line of Succession, which formerly guaranteed the first-born male the right to succeed to the throne, was changed with the ‘Canadian Succession to the Throne Act of 2013’. Or so many people thought!

This goes back to the 2011 Commonwealth Heads of Government Meeting in Perth, Australia, when the 16 realms within the Commonwealth, agreed to modernize the Line of Succession laws, to allow a first-born to become monarch, regardless of gender, and, to allow the Sovereign to marry a Catholic (but maintaining that a Catholic cannot succeed to the throne).

Andre Binette, a Canadian constitutional lawyer, says Canada should have followed Australia’s example, and only changed the succession law, after having the gained the consent of the provinces and territories in this federation.

He says it is an important precedent, that “the Harper government is going back on this and setting a much lower precedent by simply assenting to a British law without respecting the Canadian constitution.”

The current premier of Quebec, Phillip Couillard, said of the matter, while in opposition, “if my consent is required, the consent of the Quebec government, for a change in the Royal Succession, I will have one or two other matters to discuss as well,”  This kind of talk has eyes glazing over, at the very least in Canada.

From 1982, and then Prime Minister Trudeau’s repatriation of the Constitution, there has been a series of wrangling and negotiating, and from Quebec’s point of view, a betrayal, that culminated at one point, with Quebec’s referendum on separation. Many have been content to leave the situation as it is, with Quebec still not having become a signatory.

Canadians are terrorized by constitutional discussions but it would be inevitable by 2017, the 150th anniversary of Confederation.

A perfect storm is brewing with the approach of 2017.  The 150th anniversary of Canadian Confederation, and the 375th anniversary of Montreal, Canada’s largest mainly French-speaking city in the province of Quebec, both take place in 2017, and would or could be the ideal time to mend fences.

And while many are loathe to open constitutional debate, even as Canadian taxpayers rail against the financial abuses being revealed in the Senate, the Upper chamber of Parliament, it would take just such constitutional discussions and unanimous agreement from the provinces, to abolish the senate.

The time may be fast approaching when these political challenges will have to be addressed, in order to give the Prince and Princess of England equal status in the future.

The case is now with Justice Claude Bouchard of the Superior Court of Quebec. Oral arguments have been presented. Now written submissions will be provided, due to the exceptional complexity of the case, according to Andre Binette. The federal government will reply by October 10th, with another month for a reply from the challenging parties.  Therefore, 2016 will set the stage for 2017.

Meanwhile, Princess Charlotte is to be christened on July 5 by the Archbishop of Canterbury.