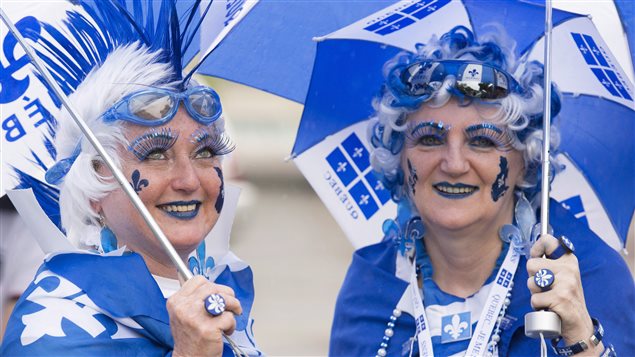 Many French-speakers literally wrap themselves in the flag to celebrate Quebec’s “national holiday,” but a recent study shows English-speakers and ethnic minorities do not plan to attend the festivities.
Photo Credit: Graham Hughes/Canadian Press

June 24th is the province of Quebec’s  Fête nationale or “national holiday” and most English-speaking and ethnic minorities will not attend the festivities, according to a recent survey.  Exactly one week later on July 1st is Canada’s national holiday and few French-speaking people are planning to attend those celebrations in Quebec.

“It tells you that with respect to the identification with Quebec and Canada respectively, there are some important differences between francophones and non-francophones,” says Jack Jedwab, executive vice-president of the Association for Canadian Studies, a non-profit that promotes an understanding of Canadian history.

The Quebec holiday was originally a religious celebration and was called la Fête de la St-Jean-Baptiste, honouring St. John the Baptiste. But in the 1960s Quebec society shook off the strong hold of the Catholic Church. In the following decade, the nationalist movement became so strong that the government in 1977 changed the name of the day to la Fête nationale.

A pro-independence group took over organization of the Quebec holiday and it became increasingly politicized with many events including speeches promoting separation.  At the same time, Canada Day became more polarized and promoted unity. There have been efforts in recent years to draw more minority participation to the Quebec celebrations, and this year, one opposition politician has suggested it’s time to do away with the political speeches that precede some of them.

‘There is still polarization’

Although the plan for Quebec independence was defeated in two referendums and the talk of sovereignty has dampened over the years, the holidays still appear to be very much associated with politics in people’s minds.

Jedwab says the fact that non-francophones are not likely to attend the Quebec Fête nationale celebrations and that most francophones will not attend the Canada Day celebrations “suggests that although we conduct our debates about our identity and our constitutional future in a very democratic way, that underlying that there’s still a polarization that characterizes nationalist movements…whether it’s here in Quebec or elsewhere on the planet.”