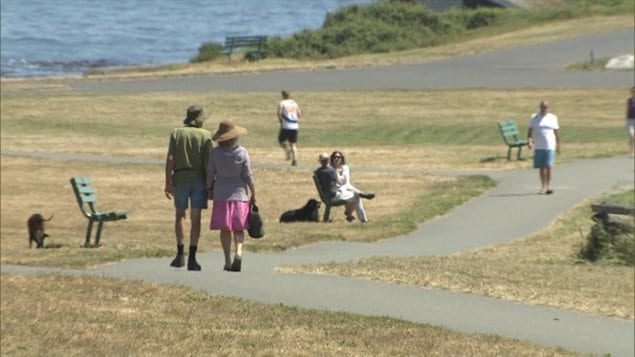 Yellowing grass in parks on Vancouver Island are indicative of a drought on the Island, and in other areas on the BC mainland. THE new PWRC will work with communities to research and develop policies to mitigate the new and changing climate situation.
Photo Credit: CBC

British Columbia is most often pictured as a province with high snowy mountains, with inviting deep blue lakes, and rushing salmon filled rivers, in other words, plenty of water.. That has been the case, but it’s a picture that may soon change.

Just across the British Columbia border with the US, the state of Washington declared a state-wide drought emergency last month and predicted a loss of crops worth $1.2 billion this year due to drought.

Further south from British Columbia on the North American west coast, California is one of the world’s major fruit, vegetable, and nut growing regions. However it’s facing a serious water shortage crisis, now in its fourth year

He recently completed a study on drought and climate response in the Okanagan Valley, in British Columbia one of Canada’s two prime wine and fruit growing regions, and just north of the Washington border.

Conrad  sits on the board of directors for the B.C. Water & Waste Association as a director of the American Water Works Association.

He will also be working closely with a new initiative by Simon Fraser University’s Faculty of Environment, to be called the Pacific Pacific Water Research Centre (PWRC)

In a new report for the group POLIS and Ecojustice, the authors state that  “ If B.C. doesn’t fundamentally address the issues being faced today, sometime in the not-so-distant future B.C. could be in a multi-year drought like California, or have other social, economic, and environmental problems from the over-allocation and over-pumping of groundwater—at least on a regional scale. So, let us consider these warnings as a gift to be acted upon, rather than a message describing B.C.’s possible future.”

Stephen Conrad points out that our water infrastructure, management and policies are based on climate water cycles that have been relatively stable for thousands of years,  but that these traditional patterns that are no longer valid.

This includes both personal and commercial perceptions about water availability and use of water. On a per capita basis, B.C.residents have among the highest personal water usage rates in Canada.

An example of one of the recent criticisms about commercial water management in the provincial policy of charging water-bottling companies only $2.25 per million litres for the critical groundwater they take out. Due to lack of surface water, the high rate of use of water from aquifers is becoming a major concern in California and throughout the US Midwest.

A new provincial Water Sustainability Act is still under review and development and is scheduled to come into effect in 2016.

To help plan for the future, Simon Fraser University will announce this week the creation of the PWRC.

This will take place at two events this week, the first is the SFU Blue conference, highlighting Simon Fraser University’s involvement with various community groups, industry and government on water issues with researchers participating in discussions about how the world needs to adapt to conserving stressed and dwindling water resources.

The PWRC will also be official announced also this week at the 6th annual Canadian Water Summit to be held in Vancouver.

University Faculty of Environment Dean Ingrid Leman Stefanovic  says the centre will be a mecca of cross-disciplinary collaborative research applied to mitigating real world water crises globally; its research agenda will be driven by community concerns

While B.C. still has plenty of water in many regions, others such as the Okanagan in the interior, and on Vancouver Island have been facing increasing water shortages in the past few years.

On Vancouver Island, Rodger Hunter, Cowichan Watershed Board co­ordinator, said the water level in the lake is already “much, much lower” than it should be at this time of year. Unless summer brings “miracle” rains, Hunter said, the river could soon be “a trickle, compared to what it should be.”

Snow pack levels in the mountains were also greatly reduced this past winter heightening concerns in many areas about water availability later in the summer.

While climate change is a global issue and national and provincial water policies need to change, Conrad says the PWRC will begin its work with regions to help with research needs and solutions at that level where they can be most effective with varying local situations.