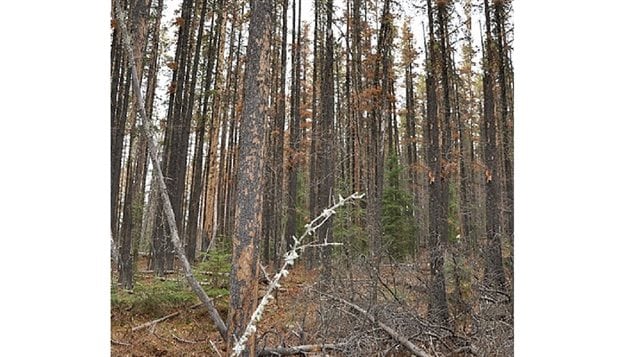 New research shows that there is a serious ripple effect when pine beetles kill mature pine trees, the symbiotic root fungi in the soil, and so weakening seedlings and greatly affecting their survivability
Photo Credit: Justine Karst - U Ab

Canada’s vast boreal forests are under attack. The enemy is the pine beetle which is destroying many millions of trees in British Columbia and Alberta and spreading eastward.

A new study has found that young pines are not surviving even though they haven’t been infected.

Justine Karst (PhD) is co-lead author of new research into this phenomenon. She is an assistant professor in the Department of Renewable Resources at the University of Alberta.

The new research from the Faculty of Agricultural, Life and Environmental Sciences (ALES) shows that when pine beetles kill off mature trees, it has a ripple effect which dramatically reduces the survivability of seedlings.

The study, co-lead authored with Nadir Erbilgin, Canada Research Chair and associate professor in forest entomology and chemical ecology, was published in the journal New Phytologist.

The research found that when the trees are killed, the soil fungi along their roots also dies.  That same soil fungi helps new seedlings, the next generation in the forest, to survive and grow.  The fungi feed on sugars from the fine tree roots and in turn process nutrients and minerals which the tree needs to grow and to produce chemicals which provide some defences against insects and pathogens.

Karst says research shows that while all trees have this relationship, pines are particularly sensitive to the type of fungi colonizing their roots.

When the trees are killed and that soil fungi dies or is depleted, the research shows it changes the ability of seedlings to survive and their defence chemistry is changed.

In fact, Karst says their research showed in a healthy stand of trees, seedlings have a 25 percent survival rate, whereas in a severely affected beetle-killed stand, seedling survival was almost zero.

Karst says that their study provides even more insight into the interconnectedness of nature and the ripple effects of removal of any particular element from an ecosystem.

It also shows a possible solution to enabling survival of replanted pines into a stand that has been killed off. She says adding the correct fungi to the seedlings might increase their ability to survive.

However she says, given the massive destruction caused  by the pine beetle, the make-up of the boreal forest is almost certain to change in the near future.