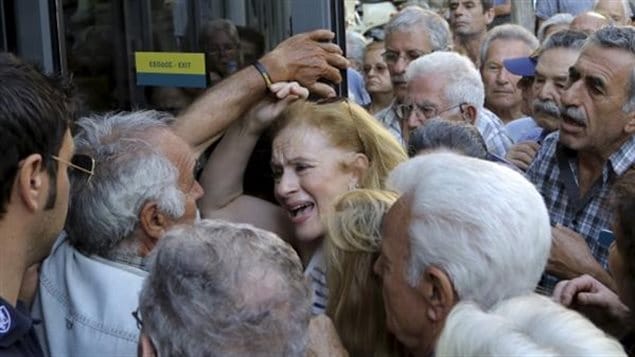 . A pensioner reacts as she tries to enter a National Bank branch to receive part of her pension at the city of Iraklio in the island of Crete, Greece Greek banks remain closed and withdrawals are limited to 60 Euros (roughly C$83) per day, Pensioners without bank cards are hardest hit. Banks have been opened to them briefly to allow withdrawals of 120 Euros per week.
Photo Credit: tefanos Rapanis/Reuters

The situation with the European Union is in crisis with Greece heavily in debt and risk of financial collapse.

How did it get to this point, and what are the implications.  George Georgopoulos (PhD) is associate professor in the Department of Economics, and Graduate Programme Director at York University in Toronto. He has just returned from two weeks in Greece discussing the economics of the situation.

Greece is hoping that it will be granted a third massive bailout of billions of Euros, but European Union leaders this week were highly agitated demanding that Greece come up with an acceptable plan of financial reforms.

Prime Minister Alexis Tsipras is seeking a new three-year bailout, promising reforms in taxes and pensions, after calling a surprise referendum on the EU proposals for austerity, which angered the EU leaders, and which Greeks rejected, further upsetting negotiations.

Tsipras is now planning to present his own austerity proposals. EU leaders said they’d heard promises before but now need action.  Prime Minister Alexis Tsipras promised the plan would be submitted today, so that EU leaders could study them priot to the  summit of the European Union’s 28 members set for Sunday.

The International Monetary Fund, and some EU leaders like Germany’s Angela Merkel now reluctantly agree that some of the debt will have to be forgiven,  but she has also said that a big debt write-off is out of the question.

Professor Georgopoulos suggests a more likely scenario, at least for the majority of the debt, is to extend the repayment schedule to reduce the repayment load by spreading it out over a longer period.

International Monetary Fund chief Christine Lagarde reiterated Wednesday that Greece’s massive debt would need restructuring . “It well may be that the numbers may have to be revisited, but our analysis has not changed,” she said of the need for granting Greece better repayment terms

Professor Georgopoulos notes that more than economics is at stake here.

As a member of NATO, geopolitics also plays a role.  He says most Greeks want to remain in the EU, and not granting them a bailout and being kicked out of the EU would embitter them towards the “west” and have them turning more toward Russia.

Indeed, U.S. Treasury Secretary Jack Lew has argued debt relief was needed for a deal — and said the potential of a Greek euro-exit would be a “geopolitical mistake.”