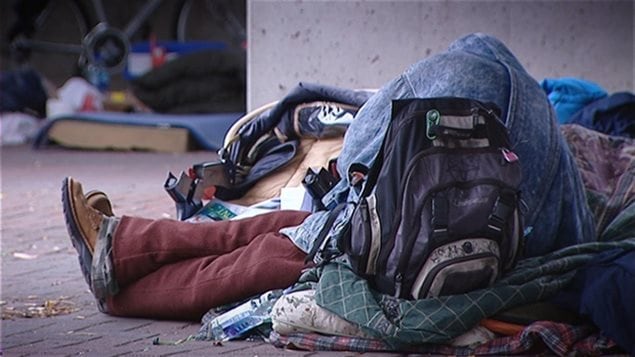 Homelessness was surveyed for the first time this spring in Montreal, and while the numbers were lower than expected, organizers are hopeful the data will lead to improved programs addressing the issues.
Photo Credit: CBC

Homeless people matter to Mayor Denis Coderre in Montreal. Early this spring, when the temperatures were still frigid, Coderre led a campaign to survey, or conduct a census on homelessness, to get an idea of how many people were living on the streets.

More than 800 volunteers fanned out across the city in March to talk to people on the street and find out about their living conditions. Those known to be the “hidden homeless” were also included.

“In the West Island, what we’re told is that there’s no street homelessness at night to speak of so that’s why it’s important to do the day centres, where in fact you might get young people couch surfing in the basement of a friend,” said James McGregor, the general manager of the project, told CBC News.

“It’s a different kind of homelessness. It’s what’s called hidden homelessness, so that’s what we’re hoping to get a better picture.”

There are plans to conduct another survey this summer when the weather is more conducive to sleeping outside.

McGill University professor and researcher, Eric Latimer, who worked on the survey as well, said the plan is to repeat the count every two years. With accurate numbers, Latimer wants the city and the province to take action.

“Ultimately, I would hope that we will put in place programs to actually help people who are homeless get housed,” he said. “There are some of those programs starting up right now and probably we need to increase their number.”