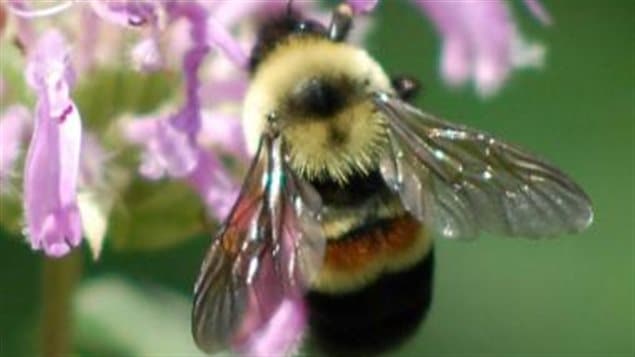 The Rusty-Patched Bumble Bee used to be one of the most common in southern Ontario and Quebec, but has been declining since the 1970's and now these bees are very rare.
Photo Credit: via Ontario.ca- environment

Much has been made of farm use of insecticides, particularly the family of neonicotinoids, as a significant cause in the decline of honey bees.   Experts have long said this is most certainly also a factor in decline of wild bees, such as Bumble Bees, along with habitat loss.

However a new study says while those are certainly factors, climate change seems to be the greatest contributor to the diminished worldwide range of species of the once ubiquitous Bumble Bee, and as such also an important factor in their decline. This is particularly so for those species of bumble bees which occupy the southern, and therefore warmest, extent of the range.

Professor Laurence Packer (PhD) is a world-renowned expert on bees. A professor of biology at York University in Toronto, he is also a co-author of the new study on the declining range of Bumble Bees recently published in the journal Science.

Professor Packer says Bumble Bees are slowly being squeezed into a smaller range as the world heats up, and climate changes.

Lead author Jeremy Kerr, professor of biology at the University of Ottawa, told CBC that due to human-caused climate change, the southern extent of the bumble bee range is becoming too hot for them and their range is shrinking and southerly species to disappear.

Shiela Colla, another co-author says, ““One of the scariest parts of the work that I’ve done is just realizing how quickly the situation is changing. The bumble bees that are in decline were doing fine 50 years ago. We’re talking about large changes in community composition of essential pollinators over just a few decades.”

The researchers looked at museum records of 67 species of bumblebees in North America and Europe over the past 110 years. Professor Packer notes that this kind of research would be impossible without access to vast collections of curated specimens in museums, as well as in labs such as his (the Packer Lab at York U) which holds hundreds of thousands of bees.

“Museums hold the basic biological information that tells us about the history of our impact on the world. They also contain the specimens that everything ultimately has to be compared to in order for identifications to be reliable,” he says.

In addition to mapping the distributions of the bumblebees through time the researchers then measured changes in both land use (habitat changes) and pesticide use, and concluded that while both are known to be important considerations in bee decline, climate change was the over-riding cause of range reductions of the bees, especially the added heat in the southern extent of traditional ranges of various bumble bee species. He notes that bumble bees evolved as a mild-temperature species, and the increased heat may just be too much for them.

“One of the important things to me was how many species are being impacted by climate change. That was a bit of a surprise. I’d suspected some may be declining, but not such a large proportion. The fact that at the northern edges of their ranges they are not moving north as the climate changes is actually really quite worrying.”

He also notes that this is an example of how species, which develop habits over eons, have difficulty coping with the rapid changes to environments due to global warming which is changing climates around the world so quickly.

Professor Packer points out that bumble bees are active throughout the spring, summer and early fall, a longer period than most other insects including other bees, and as such are even more affected by conditions throughout the time plants are flowering   Bumble bees also visit a wide variety of plants and flowers, and because of these two factors, bumble bees are very important to the pollination of wild plants and crops.  He notes they are as important as honey bees, if not more so, in terms of plant pollination..

The researchers  also speculate whether global warming is having a similar effect on other pollinators as most of the more abundant species of bees have also evolved as mild climate creatures.

They suggest that people can help the bees by planting gardens with bee-friendly plants such as raspberries, clover, or open flowers which easy for bees to enter.  Other suggestions include preserving natural areas in higher-altitude or cooler “microclimates” and ensuring there are places left for wildflowers and bee nesting areas at the edge of farmers’ fields.