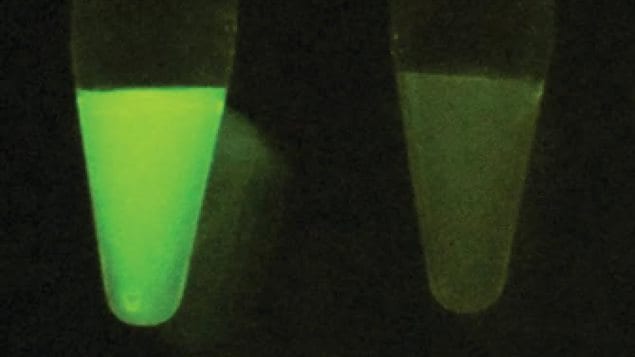 A small sample of a patient's blood, stool or urine with even a trace of a particular pathogen will cause the testing agent to glow (left) while a sample with no pathogen (right) remains dark. The technology has the potential to be adjsted and applicable to a wide variety of infections.
Photo Credit: Yingfu Li et al- McMaster University

Any medical professional will tell you that the earlier a disease is detected, the better.

Researchers at McMaster University have now created a technology that can detect diseases even before symptoms show up.

Yingfu Li (PhD)  is a professor in the Department of Biochemistry and Biomedical Sciences at McMaster University in Hamilton, Ontario.

The new technology allows for detection of pathogens within a couple of hours at most, compared to current testing which can take days.

Instead of having to grow bacteria from a patient’s sample- requiring tens of thousands of infectious cells,  the new “molecular” testing detects the smallest traces of metabolites, proteins or fragments of DNA of a pathogen. requiring only hundreds of cells or pathogen markers, basically mere trace amounts.

Because of that, the presence of an infection can be detected very early, before it begins to cause symptoms or problems.

The research was published in the journal Angewandte Chemie, entitled,”Biosensing by Tandem Reactions of Structure Switching, Nucleolytic Digestion, and DNA Amplification of a DNA Assembly”

Yingfu Li and researchers from McMaster University’s Biointerfaces Institute, have created a molecular device using DNA that reacts to other specific molecules by “switching on” and actually glowing. Thus the researchers can engineer their technology to react to known molecules of a specific infection such as Hepatitus C or the superbug “C dificile”.

“The test has the best sensitivity ever reported for a detection system of this kind,” said McMaster Biointerfaces Director John Brennan. “It is as much as 10,000 times more sensitive than other detection systems.”

The list of advantages continues in the technology’s simplicity and cost, and potential to be expanded to test for many diseases and infections including cancers.

The method does not require complicated and expensive lab equipment and time, and can be done at room temperature. This can be extremely important in less developed countries, and in situations like pathogen outbreaks anywhere in the world, such that people can be tested quickly, identified as carriers or not,  and if need be quarantined and treated quickly as well thereby greatly reducing the spread of an infection. Rapid detection and treatment also reduces medical costs.

In addition, the test can accurately determine what the pathogen is, and so doctors aren’t prescribing medication that isn’t needed. A virus for example may result in symptoms similar to a bacterial infection. A doctor may therefore prescribe antibiotics, wasted on viral infections, and which may contribute to antibiotic tolerance in patients and bacteria.

The researchers are now developing a portable testing unit and working with “industrial partners” to further develop the technology.

Professor Li expects a two to four year period of development and testing before it becomes widely available as they continue to expand the numbers of diseases that can be detected along with other applications like detecting the presence of lead, or other heavy metals.