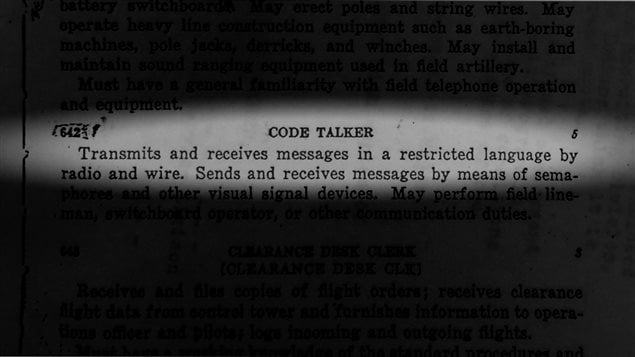 A great many people are unaware that Canadian aboriginals played a vital role in secret communications for the Allies in the Second World War using their language to completely confound the enemy who were never able to break the "code"
Photo Credit: creecodetalker.com

The unbreakable Canadian “code” of the Second World War

It was a truly amazing story and it has been turned into a great movie, called, “The Imitation Game’.  It’s about the special team led by Alan Turing at Bletchley Park and how they broke the German Enigma code in WWII.

But some Canadians had a secret code as well, and it wasn’t broken by the Germans no matter how hard they tried.

The use of native languages, ie Navajo,  by Americans was also made into a successful film in 2002 called “The Windtalkers”.  As a result of that film, many are aware of the secret weapon of native language used to foil Japanese attempts to break into Allied communications.   What few know is that Canadian aboriginals played a vital role as well beginning at about the same time as the Navajo were beginning in the Pacific

Several aboriginal Cree from western Canada- Alberta and Saskatchewan- had joined the Canadian army and were given a very secret assignment of communications.

The Canadian aboriginal language speakers would translate vital messages into Cree and transmit them to another Cree speaker at the other end who would translate the message back into English. it was shown that transmitting messages this way was much quicker than using traditional coded messages which took a much longer  time for operators to de-code.

One of these top-secret speakers was Charles “Checker” Tompkins, a Metis from Saskatchewan who spoke fluent Cree.

After enlisting in 1940, he completed his training and  was transferred to Britain six months later.

One day he was summoned to Canadian military headquarters in London, under unusual secrecy. Not even his commanding officer was told why.

There it was explained his new role was to be as a “code talker”.    Because many military terms didn’t exist in native languages, new terms had to be made up for things like tanks, and machine guns and bombers.  A machine gun might be called for example, a “little gun that shoots fast”, while a Mosquito fighter-bomber would use the Cree word for mosquito- “sakimes”. Several other Cree had been secretly brought together as well.

After a week of developing new terms, they went to work.

Tompkins was sent to work with the American  8th Air Force, and was sworn to absolute secrecy.

Tomkins returned from the war, but with jobs difficult to come by, he returned to the military where he served for another 25 years, in various regiments’ The Sherbrooke Fusiliers, Royal Canadian Army Service Corps and the Princess Patricia’s Canadian Light Infantry.  The code talkers took their oath of secrecy seriously and for almost the rest of his life, Tompkins never told of his work, not even to his family. He only talked about it shortly before his death in 2003 at age 85 when he was interviewed by a team from the US Smithsonian Institute.

While their work was quietly de-classified in 1963,  most strictly honoured that oath  and the highly secretive work right to the end of their lives. Sadly, most of this historic information went with these veterans to the grave.

Now, two young filmmakers are making a short-documentary about the Canadian code-talkers.  Alexandra Lazarowich and Cowboy Smithx and crew were in Alberta recently interviewing people for the film.

Tompkins was her uncle and she says of the Canadian code talkers, “We want justice for them. That’s what we want to do with this film. In my secret heart of hearts I’m hoping to get congressional medals for them. …They were never honoured while they were alive. This is the best we can do for them now.”

We’re trying to piece together a timeline, pulling strings of information to see how to build the story, trying to find connections. There are so many pieces that are unknown,”

She notes that the Canadian code talkers were never honoured by either the Canadian or US governments. Because the Canadian Cree worked for the US, she says she is trying to get a Congressional medal awarded to their memory.