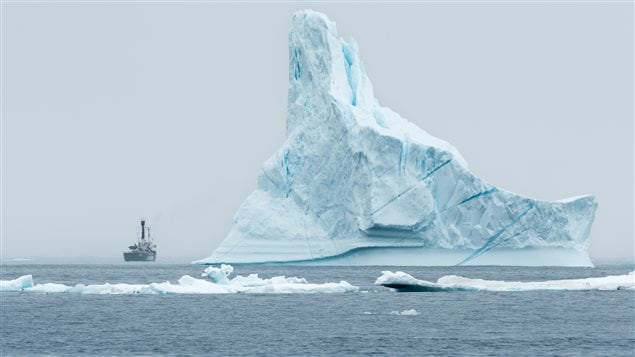 The Greenpeace ship, Arctic Sunrise in northern seas off the coast of Greenland this week in order to monitor the effects of seismic oil exploration
Photo Credit: Christian Aslund-Greenpeace

Greenpeace to record seismic oil exploration in the Arctic

There has, and continues to be, great controversy about oil exploration in the Arctic.

One aspect of that is seismic exploration for potential oil and gas reserves under the Arctic seabed.

Against ongoing protest, the Canadian government has granted permission for a consortium of international oil companies to explore the Canadian seabed off Baffin Island.  That has not happened this summer. However, the Norwegian company hired by the consortium is conducting tests off the coast off Greenland.

Greenpeace has sent a ship to monitor the testing and record it and how it may be affecting marine life.

Alex Speers-Roesch is with the Arctic Campaign for Greenpeace Canada.

Greenpeace has sent a crew aboard its Arctic Sunrise icebreaker to record — with photos, video and audio — a TGS-Nopec 2D seismic project in real time.

Unlike some of their highly publicized protest activities, Greenpeace will not interfere in any way with the seismic exploration.

Using an array of air guns, the seismic tests produce pulses of sound waves that will penetrate the sea floor. The reflected sounds are then detected with sophisticated instruments which determine the various layers under the seabed and locate potential reservoirs of gas and oil.

According to a report commissioned for Greenpeace, the air guns will emit sounds estimated to reach 230 decibels at a distance of one metre, repeat those pulses every 13 to 15 seconds and do so 24 hours a day while operating as they create a map of the seabed and layers.

In comparison, a jet engine emits 150 decibels at take-off, at a distance of 25 metres. Live rock music can reach 110 decibels.

The Nunavut communities on Baffin Island and elsewhere have said this testing will be harmful to the animals they depend on, and their way of life.  They have launched a series of challenges to prevent the testing. The legal case has been making it’s way through the various levels of the judicial system.

On August 17 the Federal Court of Appeal ruled against the town of Clyde River and other Nunavut communities  which had launched a legal challenge against the testing off Baffin Island. That challenge may now be headed for the Supreme Court.

Speers-Roesch says the purpose of the Greenpeace monitoring of testing off Greenland is to gather more information about what is in involved in such testing and make the public more aware of the situation. The information may be used to help in a possible further legal challenge to the testing.

To further bolster concerns against such testing, Greenpeace Nordic (Finland, Sweden, Denmark and Norway) has also just released a 100-page report on the how many species use sound to communicate, navigate,  and forage for food and how underwater sound pollution can adversely effect them

The document is called, “A Review of the Impact of Seismic Survey Noise on Narwhal and other Arctic Cetaceans”

Speers-Roesch points out that the animals are extremely sensitive to sound, citing an example of a case where Narwhal reacted to the sound of a ship breaking through ice some 80 kilometers away.

In their submission to the Federal Court regarding the future Canadian testing TGS-Nopec says it would mitigate any potential harm in several ways including for example, by turning the air guns off if any marine mammals are detected through acoustic monitoring. They would also hire Inuit monitors to be on board.

This is the fifth year that TGS Nopec has been conducting tests off Greenland.  Although it has Canadian government licences and did not test in Canadian waters this year, the company says it will begin tests off Baffin Island next year.