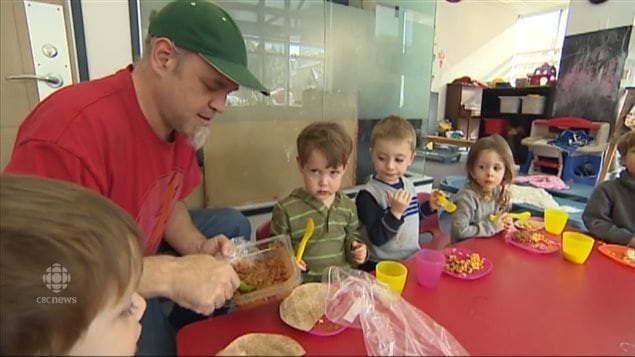 With children, the emphasis should be on healthy eating and active living, say Canadian dieticians.
Photo Credit: CBC

Childhood obesity rates have not gone down in the last decades and are at their highest level ever, according to a recent study. But dietitians say it is a mistake to put children on diets.

“I know from research and from working with families that when there’s too much attention put on weight or external appearances that that down the road is really setting children up for potentially developing an eating disorder,” says Maria Ricupero, a dietician and national spokesperson for the Dietitians of Canada.

Instead, the dietitians like to focus on the overall health of children. They emphasize healthy eating and daily active living. That does not mean telling children to go out and exercise, but rather engaging them in fun activities and setting the example. Research suggests that family members who eat together have better eating habits.

Limit the marketing of junk food to children, says dietician

Junk food adds to the obesity problem. Ricupero would like to see governments put limits on the marketing of high-calorie, high-sugar foods to children since the food industry does not self-regulate effectively.

Food insecurity is also a major issue, says Ricupero. Not all Canadians have the means to buy the food that is healthy and nutritious.

‘Food is something to be celebrated’

“I really think we need to shift the focus away from weight,” says Ricupero. “When food becomes about calories or the number of fat and sugar grams—people don’t think of food in those terms. Food is something to be truly celebrated.

“We really need to look at foods that are going to help promote growth and development. I think that’s how we can approach it.”