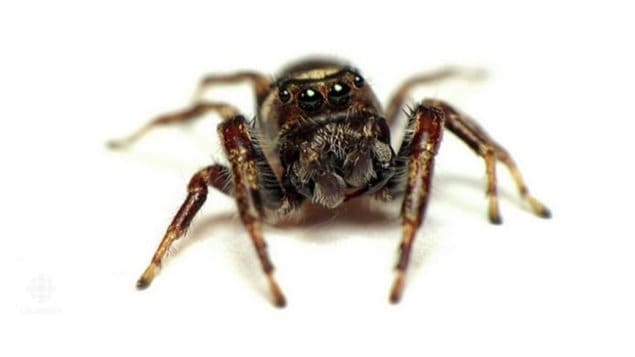 Bronze jumping spiders, which are about half a centimetre long, are considered beneficial because they prey on caterpillars, aphids or other pests that damage fruits and flowers. Pesticides however affect not only the pest insects, but aslo the beneficial insects like this spider
Photo Credit: Crystal Ernst/McGill University

It may be hard to imagine, but even spiders have individual personality traits and behaviour.

Research from McGill University found that when exposed to very minute amounts of a common pesticide, their behaviour changed.

Raphaël Royauté (PhD), led the research while an entymology student in Montreal at McGill University’s Department of Natural Resource Sciences

He is currently a post-doctoral researcher in the Department of Biological Sciences at North Dakota State University where I reached him by mobile phone.

The research was published earlier this year in the scientific journal Functional Ecology with the title, Under the influence: sublethal exposure to an insecticide affects personality expression in a jumping spider

Raphaël Royauté, conducted the study for his PhD research with McGill professor Chris Buddle and Charles Vincent of Agriculture and Agri-Food Canada.

The research involved the bronze jumping spider which is often found in apple orchards,. Rather than spin webs and wait for prey, Royauté says the spiders, about half a centimetre long, are like the “big cats” of the insect world, stalking and then leaping on their prey.

Perhaps surprisingly individual spiders have individual personalities. Some might be more aggressive than others, more or less adventurous than others, and so on.(see video below)

However, the research found that their behaviour changed after exposure to tiny amounts of a common orchard pesticide, phosmet.

Royauté said when a farmer sprays the orchard, it may in some cases kill the spiders directly along with other pest insects, but he wanted to study the effects of the low-dose exposure from the residue of the insecticide which will remain for weeks afterward on the leaves and fruit on which the spiders walk.

To do this they diluted the chemical so it was 10-thousand times lower than the recommended field dose.

Because individuals have different behaviour, they were tested before and after the exposure.

They tested 176 spiders in a box and studied how ‘adventurous” they were at exploring this environment. Another part of the research involved measuring the time they took to attack fruit fly prey in a petri dish.

As a group, he says the average of reactions were little changed, but exposed spiders seemed to lose their individual personality differences and showed behaviours that departed from their normal personality type.

He says such a personality/reaction change may potentially affect their survivability, by affecting their hunting strategy, mating strategy, or reaction to danger such as exposing themselves to be eaten by other predators.

This aspect is something he will explore in the future.

He points out however these are questions that are more difficult to determine.

At this point he says the research shows only that low doses clearly change a spider’s typical behaviour, and that other negative aspects can only be speculated on at this point..

However, he said if enough individuals were affected, and in a negative way, it might threaten an entire population’s survival.

Another aspect he hopes to examine in future is the dynamic between predator and prey when both have been exposed to low-dose toxicity.

The McGill research was funded by the Natural Sciences and Engineering Council of Canada and by Agriculture and Agri-Food Canada.

with files from Emily Chung- CBC

video showing differing personality of individual spiders,faced with a mirror- one is timid, the other agressive