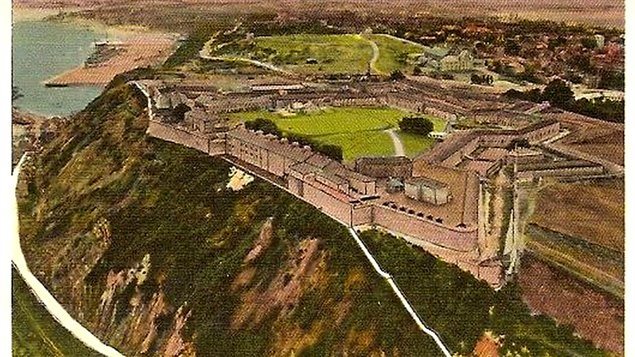 Old postcard showing the fortress "Citadel" of Quebec City on an inaccesible steep cliff with the plains of Abraham behind. French forces were arranged to the east and several kilometres to the west upriver, but egos and disputes on the French side left a weak spot close to the citadel which Wolfe exploited to finally get his forces within striking distance of the city.

History: Sept 13, 1759 the battle that changed North America and the world

The Battle of Quebec: the plains of Abraham

In terms of size, it was not an epic battle, but in terms of its effect on the course of world history, enormous.

On the morning of September 13, 1759, a brief battle changed the entire course of North American and world history. Some accounts say the battle lasted an hour, with skirmishes for several more, other accounts say the main conflict lasted only about 15 minutes.

Prior to the Seven Years War, the French influence and control extended across most of North America. This included most of what was to become Canada and the central US, giving them access to the lucrative fur and timber trades, and other resources of the continent.

The French had long been challenging the lesser British presence on the continent.

The Seven Years War began in Europe in 1756 primarily between England and France, although almost all major European powers later were caught up in the conflict even extending to India and other colonial areas, thus becoming the first global conflict.

In fact fighting- in essence the war- between British and French had already begun in 1754 in North America as both sought to eliminate the other as a commercial rival.

By 1756, the British had suffered a number of losses in North America as French control expanded.

However, British leader, William Pitt (the Elder) saw the enormous potential wealth and strategic importance of winning the new continent. With the war in Europe draining resources he nevertheless spent vast sums to finance military action against the French on the North American continent.

Sending a large naval force, the British captured the huge fortress of Louisbourg on what is now Cape Breton on the east coast. This vast fortress had guarded the entrance to the St Lawrence and the interior of “New France” and was a serious strategic loss for the French.

Far upstream however stood the political and military centre of New France, the Fortress of Quebec. This walled city on a high cliff strategically overlooking the St Lawrence and controlling access to the interior of North America stood in the way of British overall victory. Taking this fortress would mean the end of French control in the continent.

During the spring of 1759 the massive force of British ships and men had made their way upriver through the tricky St Lawrence, thanks in part to the navigational skills of Captain James Cook. Throughout the late spring and summer, the walled and fortified city was shelled from high points across the river and the surrounding areas burned. The British also attempted some foolish and failed attacks against the fortress with great loss of British life. The city held and the British soldiers could not get access to the heights, nor get across the heavily-defended St Charles river at Beauport which presented a barrier on the east side of the city. 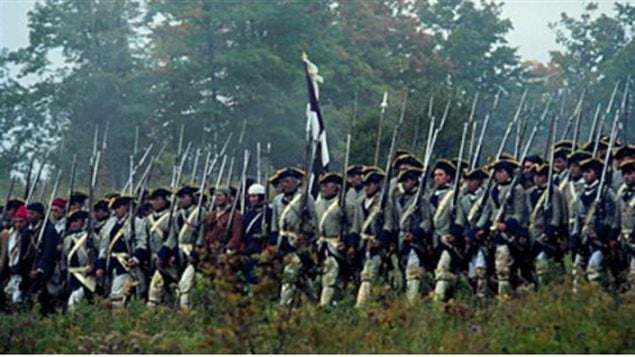 French Regulars march to meet the British on the field outside Quebec City in this CBC television re-enactment. Overconfident, they would make an extremely foolish tactical error and would be decimated. The remaining French troops then ran from the field leaving the small number of French Canadians behind. thus enabling the British to take Quebec City. © CBC

By September, French General Montcalm knew that if he could hold out until the cold weather in just a couple of months, the exposed British would be forced to withdraw.

A desperate, and now disconsolate British General Wolfe knew that too. As summer waned, it began to seem like the siege of Quebec would fail.

Some of the British ships had managed to get upstream as they searched for possible landing areas.

Then some scouts advised Wolfe of a poorly guarded path up the steep cliffs and onto the plateau behind the fortress.

This was known as the Plains of Abraham, a property that had owned in the 1600’s by a man possibly of Scottish decent, Abraham Martin, a fisherman and sometime river pilot.

In the late darkness of September 12, thanks in no small part to incredible luck that the French were expecting a floating convoy of relief supplies from Montreal further upstream, led by an officer who spoke French British boatloads of troops glided past the sentries answering in French to their challenge.

They were landed at the pathway discovered and the soldiers scaled their way up the cliff. A brief skirmish with the lightly defended cliff top eliminated French resistance, and hundreds of troops made it onto the heights.

On the 13th, the French awakened to the sight of a British army massed in typical European fashion, on the field outside the gates. 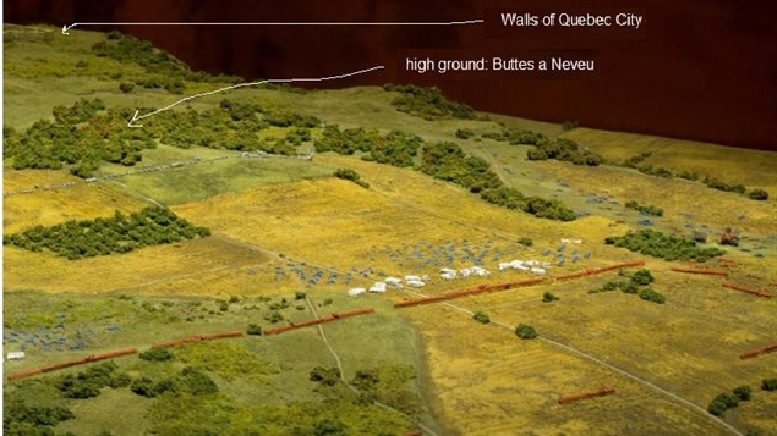 Scale model of the battle on the plain beside Quebec City fortress. Red lines are British (with Wolfe toward the far right side) White are the French Regulars (Montcalm towards the centre) Blue spots are French Canadian militia (© Canadian War Museum- photo Steven Darby)

The French General Montcalm assembled his forces, a mix of regulars and Canadian militia and marched them from nearby Beauport to a high ground between the fortress and the British. The British in a tactical error had not occupied this ground but had lined up at the end of the field. The French-Canadian militia in their fashion took cover behind the hill and trees and began sniping.

Instead of waiting for the British to attack up the hill, the French regulars, emboldened by victories over the British in several previous battles, began running down the hill in a poorly organized attack firing wildly across the plateau.

The British were suffering casualties from the sniping but remained in formation. As the French came within close range, the British began firing and cut the French to ribbons.

The British were then able to occupy the city, almost in ruins from previous British bombardments.

An attempt by a French force from Montreal the next spring almost succeeded, but British reinforcements arrived, and the French would later cede Montreal as well.

The battle of Quebec signaled a major turning point in world history.  From that point on, French influence and control in the continent was all but extinguished, and indeed diminished in other areas around the world,

England and English would become a dominant world force. The US and most of what would become Canada would became an English speaking area.

Meanwhile the British victors, realizing that English colonisers were slow in coming, needed the cooperation of the French citizenry and to reduce threats of possible revolts, decided to allow the citizenry to retain their language, Catholic religion, and French legal system in civil cases.

Eventually Scottish and English colonists, businessmen, and engineers would migrate to Montreal and transform it into the economic centre of Canada, and also spread out to establish dozens of smaller towns and cities to the south and north.

However, what is now the province of Quebec remains a mostly French-speaking region.