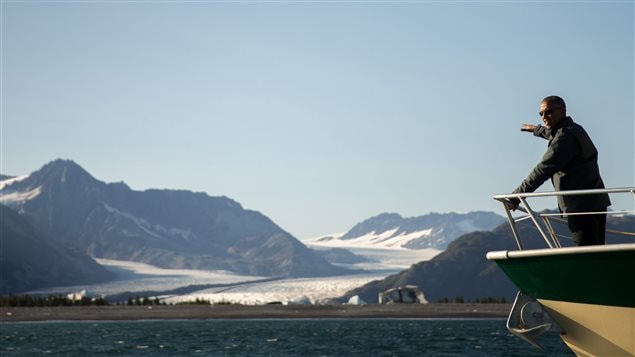 U.S. president Barack Obama on a recent visit to Alaska. What kind of momentum will this visit create in the run up to the United Nations Climate Change conference in Paris later on this year. (Andrew Harnik/AP)

All eyes were on the U.S. state of Alaska last week, where a major Arctic conference was underway.

The international event was called Global Leadership in the Arctic: Cooperation, Innovation, Engagement and Resilience, or GLACIER for short.

It included foreign ministers from around the world along with scientists , indigenous leaders and policy makers form other Arctic regions.

The event was capped with a major climate speech by U.S. President Barack Obama, who also spent time talking to local indigenous leaders and travelling to areas of the state already feeling the effects of the changing environment.

There’s been an enormous amount of commentary about the conference, Obama’s Arctic visit and how all this could shape discussions in the run up to the United Nations Climate Change Conference in Paris later on this year.

To to help us make sense of some of these issues, Arctic expert Victoria Herrmann, the U.S. director at The Arctic Institute Center for Circumpolar Security Studies, an independent think-tank, joined Eye on the Arctic on the phone after the conference was over:

Canada: The Arctic Council – What was accomplished and where we go from here, Eye on the Arctic

Denmark:  The return of the Arctic Five, Blog by Heather Exner-Pirot