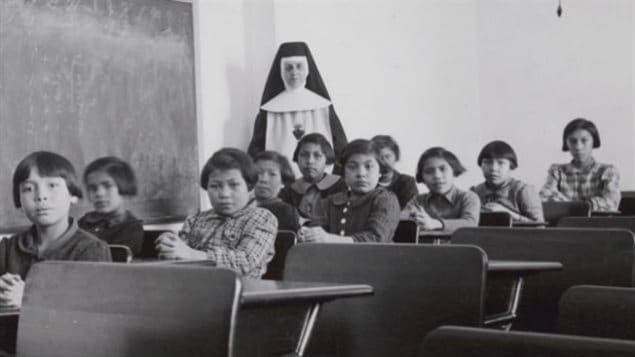 Not many smiles on children taken from their families and forbidden to speak their languages. The generations of aboriginal Canadians that suffered in residential school is now part of the Canadian history that will be taught in classes.
Photo Credit: courtesy TRC

Truth and Reconciliation in education: a beginning

Canada’s Truth and Reconciliation Commission, was a massive undertaking emotionally, physically and psychologically for Canada’s aboriginal people’s. And it has opened the eyes of many non-aboriginal Canadians to the horrifying history and legacy of colonial attitudes and efforts to “take the Indian out of the child.”

This was the guiding principle from 1876 until 1996 when the last residential school closed. At the peak, there were 80 schools across Canada and over 150,000 children walked through the doors. Some children recieved an education and were able to make a life, but for the majority, the experience was one of cruel abuse and hardship, that broke the bonds between parent and child. 4,000 children died during their stays.

The TRC heard the stories of the most recent generation, some of these people speaking of their suffering for the first time in their lives. Now, following government apologies and ongoing efforts to make financial amends, one of the ‘Calls to Action’ in the ensuing report, is to integrate this truth into Canada’s history books and classes.

Under the section titled: Education for Reconciliation, the report states: “We call upon the federal, provincial, and territorial governments, in consultation and collaboration with Survivors, Aboriginal peoples, and educators, to: i. Make age-appropriate curriculum on residential schools, Treaties, and Aboriginal peoples’ historical and contemporary contributions to Canada a mandatory education requirement for Kindergarten to Grade Twelve students.”

Charlene Bearhead is the Education Lead for the National Centre for Truth & Reconciliation at the University of Manitoba. She says the educational element in the reconciliation process, “is our collective opportunity to teach and raise our children across this country to acknowlege, recognize and respect the truth about residential schools and the history of colonialism and the history of aboriginal people in this country and our collective history,”

She says, “It also gives us the opportunity to teach and instill those understandings and values of reconciliation and what that really means as far as respectful relationships between aboriginal and non-aboriginal people.”

“This weaving of this truth and this story into curriculum that is mandatory for all children in all grades and not specifically for aboriginal children or specific groups but this is our collective history.”

Now there is plenty of material in the wake of the six years of the Truth and Reconciliation comission hearings. Charlene Bearhead says, “We have this opportunity now as educators to develop resources, to develop teacher-professional development, to develop curriculum.”

And it is happening. “This has been an extremely busy summer; already every place I go people have been saying how can we do our part for these calls for action?” She has witnessed what teachers doing in their classroom, provincial ministries of education are educating themselves and preparing.  The British Columbia Teacher’s Federation has released an e-book they are implementing.

“All across the country people are acting now”

When I ask Charlene Bearhead about the challenge of educating children in kindergarten about such painful subjects, mindful of the irony that the residential schools took the children at the same age, she says there are always ways to share the story. And that to delay the truth, leaves the children indignant about not knowing, at a later age.

Bearhead cites books like Nicola Campbell’s, titled “Shin-chi’s Canoe”. In both Campbell’s story and Kim LaFave’s images, it shares the experience in a way five year-olds can understand.

The legacy of a century and a half of misguided and cruel attempts to ‘remove the Indian from the child’ have caused such social damage, but in educating all Canadians to the truth of our history it is hoped bridges can be built to create the understanding and healing that will reconcile us all with the past.