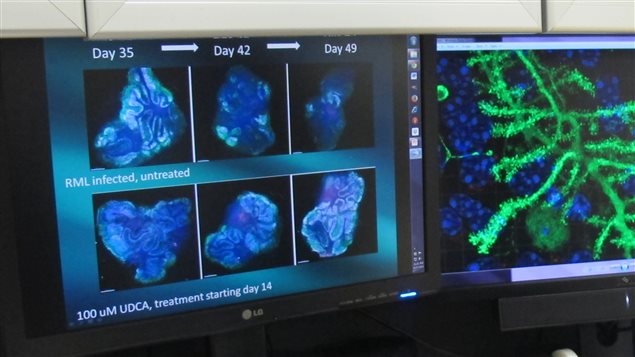 Prion disease (Creutzfeldt-JaKob Disease) is a brain-wasting disease similar to Alzheimer's and Parkinson's and others. Presently incurable, new research in Canada has made another substantial advance in the long road towards a cure.
Photo Credit: U Alberta

Brain disease is mysterious, deadly,  and in the interim extremely troubling to the victim and to family and friends.

It’s also troubling to medical researchers who are constantly looking for ways to combat diseases for which, as of yet, little can be done.

One of those diseases is prion disease, known as Creutzfeld-Jakob Disease (CJD) in humans, but also as the more common cattle disease bovine spongiform encephalopathy, (BSE), the so-called “mad-cow disease” or scrapie in sheep.

There is no cure for these diseases.

However, research in Canada has made a step in that direction. Dr. Valerie Sim  (MD) is an assistant professor in the University of Alberta’s Faculty of Medicine & Dentistry

Dr. Sim supervised the research team and her research associate Leonardo Cortez (PhD) was the lead author of the paper published in  the Journal of Virology under the title, Bile Acids Reduce Prion Conversion, Reduce Neuronal Loss, and Prolong Male Survival in Models of Prion Disease

Whether in animals or humans, “prion” disease (BSE, CJD and others) causes physical destruction within the brain such that it starts to look like swiss cheese. The effects are the same in animals or humans.  As the disease rapidly progresses, patients with CJD may experience any or all of the following symptoms:  visual deterioration and eventual blindness, dementia, involuntary muscle contractions, loss of balance, memory loss, incoordination, slowed movement, personality change, and within just a few months, death.

Prion proteins are found in the brain, and are a normal part of the body and brain function. They can be broken down, but if a prion protein becomes misshaped for whatever reason as it folds, it cannot be broken down.

This results in a chain reaction as they begin changing other prion proteins around them which quickly kills brain cells and soon leaves actual holes in the brain.

Although not exactly the same, Alzheimer’s is a similar type of protein disease, as is Parkinson’s.

These have been used in Chinese traditional medicine, and other research had shown they exhibit some slowing effects on the spread of similar protein diseases in research models. These acids normally help to break down fats and lipids that are eaten but in testing with prion disease, it appears they bind the misfolded prion proteins to prevent them spreading to other prion proteins, and to also block the pathways into brain cells which would lead to brain cell death.

Dr. Sim says these acids are produced naturally by the liver and as such are safe and also are able to pass through the blood brain barrier, both features that make them very useful as vectors.  However, to have any effect she says that the bile compounds would have to be administered very early in the disease, and that usually by the time patients come to medical attention, it’s already too late.

She says it might prove useful in those rare cases where there is an inherited genetic factor.

“Some of those people know they are carriers of the disease and currently we have nothing we can give them that works,” says Dr. Sim. “This is not a cure, but may have some benefit if given early. And for these patients, any benefit is better than nothing.”

Dr. Sim says clinical applications however are still years away, and research continues to test a combination of UDCA and TUDCA with other anti-prion compounds, and to determine for example if this would have long-term benefits for patients, or merely prolong life at the end stage of the disease.

Professor Sim notes that such advances as that of her team in finding cures for difficult diseases are often built on results from other studies unrelated to the disease research. She says that as such, it highlights the importance of “pure science research”.

She also says for now the best way to protect oneself from the most common forms of brain disease is by getting exercise, sleep, and by not smoking.