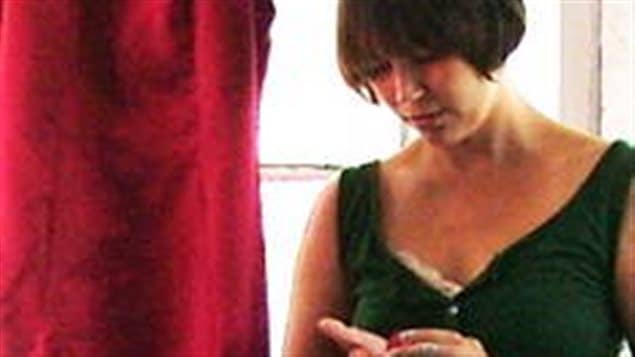 Jaime Black at an exhibit in 2010, beside one of her red dresses. She is now asking Canadians to wear a dress, hang a dress or donate a red dress this Sunday, in memory of almost 1200 missing and murdered aboriginal women.
Photo Credit: courtesy of Jaime Black / Malay Pilz.

The REDress Project is the work of Jaime Black. Now the Metis artist is asking Canadians to participate in a one-day display of red dresses to represent Canada’s missing and murdered indigenous women,

“re-dress” is defined as “the setting right of what is wrong” and, or “relief from wrong or injury”

On Sunday October 4, Black would like people to donate a red dress to the project, to hang a red dress outside their home, or wear one as they go about their day.  Almost 1,200 aboriginal women in Canada have gone missing or been murdered in the last 30 years. There were 225 more reported just last year, in 2014, according to the RCMP.

It will be another step in Black’s original goal. “Through the installation I hope to draw attention to the gendered and racialized nature of violent crimes against Aboriginal women and to evoke a presence through the marking of absence,” as she says on her website.

‘I just imagined all these red dresses in the trees, covering Winnipeg.”

The original idea came to her in a moment at a Canadian Studies academic conference in Germany. She says she was sitting listening to the discussion that did not include some of the pressing indigenous issues, and no mention of the women. ‘I just imagined all these red dresses in the trees, covering Winnipeg.”  And so it became the way to combine her activism with her art.

Five years ago she began collecting red dresses from the community and hung them in public places and spaces as a reminder of the indigenous women who are no longer alive.

“An aesthectic response to the more than 1,000 missing and murdered aboriginal women in Canada”

Jaime Black studied English Literature at the University of Manitoba and has an Education degree from The Ontario Institute of Studies in Education. She has taught in native community of Opaskwayak Cree Nation in the Pas, Manitoba, and contributed to the art curriculum for the Urban Shaman Gallery.

But the REDress and REdress Project is her powerful statement on the issue that gets little or no action from Canadian authorities. The title is the play on words, depending on how you pronounce it, “Re-dress” with the emphasis on the first two letters, is defined as “the setting right of what is wrong” and or “relief from wrong or injury”.

The red garments have been exhibited across Canada, on university campuses, and in Canada’s Museum For Human Rights.  The Globe and Mail, one of Canada’s national newspapers, described the exhibit as “haunting,”  All the more so as it over-looked the section of the nearby Red River, where 15-year-old Tina Fontaine’s body was found.