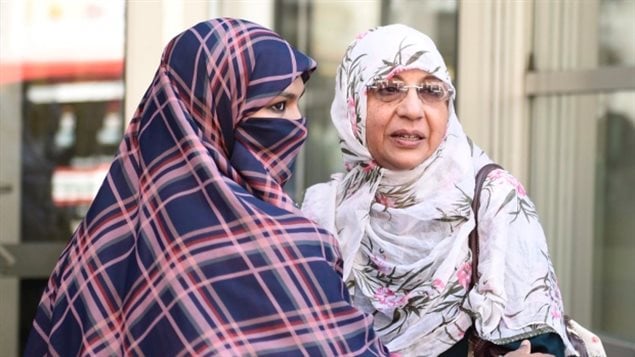 Zunera Ishaq (left) and her friend Nusrat Wahid after the Federal Court of Appeal agreed with a lower court and overturned the proposed government ban on the wearing of niqabs at citizenship ceremonies in September
Photo Credit: Justin Tang/Canadian Press

The issue of the wearing of a Muslim face covering veil, the niqab, has become a big issue in the current Canadian federal election.

It centres on the case of a Muslim immigrant who insisted on remaining covered during the swearing in ceremony to become a Canadian citizen.

The government tried to impose a ban, and is still seeking to do so. Both the Liberal Party, and New Democratic Party, contenders in the election, say there is no need for a ban. As for minority parties, the Green Party agrees while the Quebec separatist Bloc Quebecois would like to see an even wider ban including public servants.

Zunera Ishaq is a 29 year old immigrant from Pakistan . The federal Conservative government had argued that faces should be seen during the ceremony, but when she took her case to Federal Court, the ruling went against the government.

This week the results of a poll taken in March by Forum Research for the government, were released just prior to the party leaders debate. It showed that most Canadians agreed with the current Conservative Party government.

It showed most  opposed face covering during the citizenship ceremony, but otherwise was not particularly offensive to them, however they also felt it represented an oppression of women.

The government is appealing the decision saying having the face uncovered at such ceremonies is “consistent with Canadian values of openness, social cohesion, and equality.”

82% of Canadians support the niqab ban during citizenship oath

The appeal court has said it will not hear the case and the government is reported to be reviewing its options. In an email statement, a spokesman for the Conservative campaign, Stephen Lecce, spokesman Stephen Lecce wrote in an emailed statement from the Conservative campaign.  “As the prime minister has said, most Canadians find it offensive that someone would hide their identity at the very moment where they are committing to join the Canadian family. Both Justin and Thomas Mulcair are offside with Canadians on this issue.” (Justin Trudeau is the federal Liberal party leader, and Thomas Mulcair is leader of the federal New Democratic party).

October 2015, during a campaign stop PM Harper suggests the government may ban face coverings for government employees who deal with the public (front line workers)

The email is basically a reiteration of Prime Minister Stephan Harper’s comment in February after the initial Federal Court ruling allowing the wearing of a niqab in citizenship ceremonies. A few weeks later the Prime Minister said in the House of Commons. “Why would Canadians, contrary to our own values, embrace a practice … that is not transparent, that is not open and frankly is rooted in a culture that is anti-women?”

The poll was taken in March and surveyed 3,000 Canadians. Some 82 percent supported the ban on niqabs during citizenship ceremonies, and in the mostly French-speaking province of Quebec, it was 93 percent.

The respondants indicated the biggest concern was that immigrants about to become Canadian citizens should be clearly identifiable and not hide their face.

Other reasons were value-based saying, those about to become Canadians should embrace Canadian values, and that removing niqabs or burkas was the norm in Canada and the government was correct in seeking to have immigrants show their faces when becoming new Canadians.

The niqab question was part of a large comprehensive survey, and related to questions 44-through 47 ( neag bottom of page)

It should be noted that the potential citizen is identified, but in a case like this it would be done privately to a female official or officer of the court.