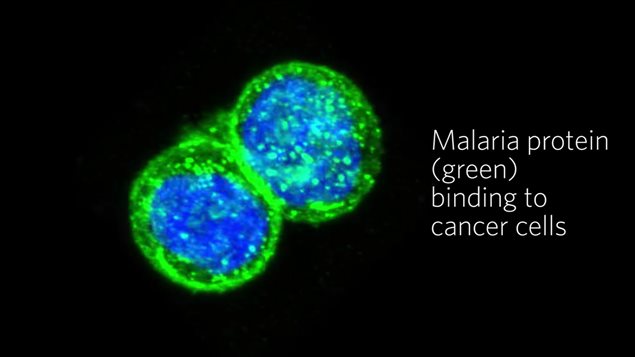 electron microscope image showing clearly how the malaria protein actively seeks out and binds to the cancer cells. When combined with the toxin, it becomes a targetted treatment leaving healthy cells unaffected while killing hte cancerous cells.
Photo Credit: UBC

Once again, a scientific discovery in one area, has led to a potential breakthrough in a completely different area.

In this case, one disease- malaria,has been developed to help fight another, cancer.

Mads Daugaard was the programme leader of the research. He is an assistant professor in the Department of Urologic Science at the Univesity of British Columbia, and senior research scientist at the Vancouver Prostate Centre, part of the Vancouver Coastal Health Research Institute.

Professor Daugaard and collaborator, Ali Salanti an immunology professor in Denmark both say there is some irony in the fact that a deadly disease like malaria, which kills more than 200,000 people a year, can be used to combat another of the world’s most deadly afflictions, cancers.

A paper on the research was published in the October 12 online edition of the respected science journal Cancer Cell, under the title,Targeting Human Cancer by a Glycosaminoglycan Binding Malaria Protein

A standard method of cancer treatment widely used today involves simply inundating the body generally –cancer cells and healthy cells combined – with toxic chemicals. Because the cancer cells are more active, they are most affected by the toxin and are killed off more quickly than healthy cells. This treatment however almost always has serious side effects.

The breakthrough originated in research in Denmark.

Researchers at the University of Denmark were looking into why pregnant women were particularly susceptible to malaria.

They found the reason was that a particular protein from the malaria parasite binds readily to a unique sugar molecule in the placenta.

The scientists realized that both placentas and cancers consist of rapidly growing cells, and they found that same unique sugar molecule was indeed also found in cancer cells.

Because of the protein’s affinity for this unique sugar molecule, this new discovery points to something scientists have long sought..a targeted delivery to cancer cells, while leaving healthy cells unaffected

“Scientists have spent decades trying to find biochemical similarities between placenta tissue and cancer, but we just didn’t have the technology to find it,” said project leader Daugaard.

“When my colleagues discovered how malaria uses the VAR2CSA protein to embed itself in the placenta, we immediately saw its potential to deliver cancer drugs in a precise, controlled way to tumours.”

Professor Daugaard and colleagues then enlisted the expertise of John Babcook and his team at The Centre for Drug Research and Development (CDRD) to attach a toxin to the protein and tested it on normal and cancerous cell lines. The results were overwhelmingly positive. The new compound drug (protein + toxin) directly targated and killed 95% of the cancer cells.

Again, the results were extremely positive.

The tumours in the lymphoma mice were a quarter the size of the control group, while tumours in two of the six prostate cancer mice completely disappeared a month after receiving the first dose. For the breast cancers, five of the six mice were cured rom metatastic disease.

The additional benefit was that there were no side-effects and the other mouse organs were not harmed by the treatment.

The research team involved lead author, Ali Salanti of the Malaria Unit, Department of Immunology and Microbiology, Centre for Medical Parasitology and several distinguished colleagues of the University of Copenhagen, Nader Al Nakouzi of the Vancouver Prostate Centre (UBC) and colleagues, Yang Mao, Dept of Biochemistry, Boston University Poul Sorenson of the BC Cancer Agency (Vancouver), and many others.

Two companies, Vancouver-based Kairos Therapeutics and Copenhagen-based VAR2 Pharmaceuticals, are developing the compound for clinical trials in humans, which will take another three to four years.