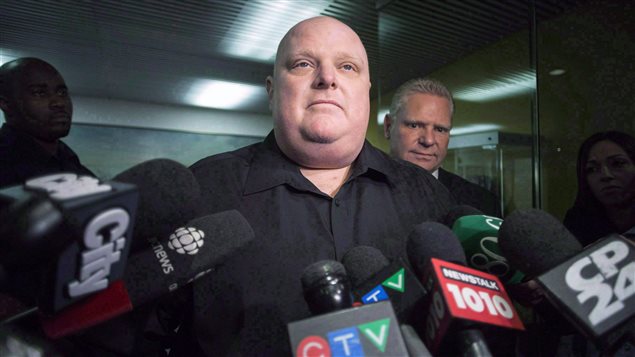 Rob Former Toronto mayor Rob Ford stands next to his brother Doug Ford outside his office as he scrums with the media in Toronto on November 21, 2014.
Photo Credit: PC / Chris Young

Toronto city councillor and former mayor Rob Ford says he will have to undergo two rounds of chemotherapy to treat a new tumour.

Speaking to reporters outside Toronto’s Mount Sinai Hospital Thursday afternoon, Ford said that doctors told him they are “99 per cent sure” the tumour is malignant.

“They did a biopsy and we’re still waiting on the results if it’s malignant or not,” Ford told reporters. “We’re praying that it’s benign but you gotta deal with the realistic part of things and I’m 99 per cent sure it’s malignant.”

Starting all over again

Ford said the discovery of this new tumour means he’ll “have to start all over again.”

Ford said he started to feel a “shooting pain” after he urinated about a month ago. Doctors discovered the tumour last week, when he was hospitalized for several days with abdominal pain.

“I was getting in better shape, feeling great, feeling better than I ever had in my life and now I’m just back to square one,” Ford said.

If the chemotherapy is successful, doctors will operate on the tumour around Christmas time, Ford said. Otherwise, he’ll have to undergo three more rounds before operating sometime in 2016.

The 45-year-old former Toronto mayor, who made international headlines with his admission of smoking crack cocaine in a “drunken stupor,” was diagnosed with a rare and aggressive form of soft-tissue cancer in Sept., 2014, forcing him to quit his re-election campaign. He underwent surgery in May, to have a cancerous tumour removed from his abdomen.