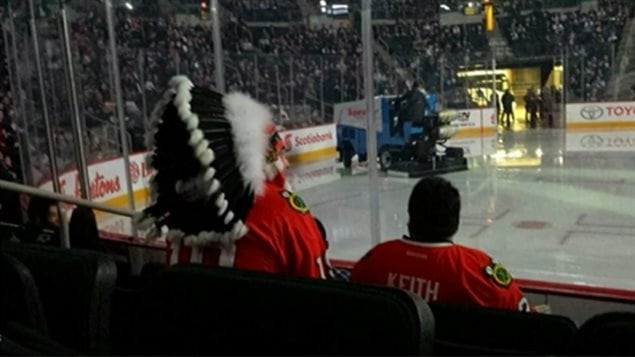 A fan wore an aboriginal headdress at a hockey game last March between the Winnipeg Jets and the Chicago Blackhawks. The Blackhawks’ team logo is the head of an aboriginal man.
Photo Credit: Jeff Stapleton

Owners of the Winnipeg Jets hockey team have reversed their position and will ban aboriginal headdresses at home games. Longtime fan Jordan Wheeler had complained about a fan wearing the feathered head gear at a game last March. Many indigenous people object to the frivolous co-opting of indigenous symbols.

Earlier this week, staff had said they would not ban the feathered head gear because the complaint involved an isolated incident. But owner Mark Chipman spoke with prominent indigenous leaders including Derek Nepinak, grand chief from the western province of Manitoba, and Kevin Chief, an elected representative in the provincial government.

“After gaining probably a better understanding of that significance we have decided that going forward we will no longer be allowing costume and non-authentic headdresses into MTS Centre for hockey events,” said Scott Brown a spokesman for the team owners.

Nepinak expressed satisfaction with the decision. “I think it is a huge sign of respect that Mr. Chipman would call me to get insight,” Nepinak said by phone from Kamloops, B.C.

Chief himself would not wear headdress

Nepinak says the headdress is so spiritually significant that even he would not wear his to a sporting event unless warranted by a ceremonial purpose.

“Such as a prayer, an honour song, if the drum is present. Then I could bring an authentic headdress to the event if protocols were followed. And that normally means I am responding to a passing of tobacco,” he said.

“But just for the purposes of showing up with my headdress, there is no way that would ever, ever happen.”