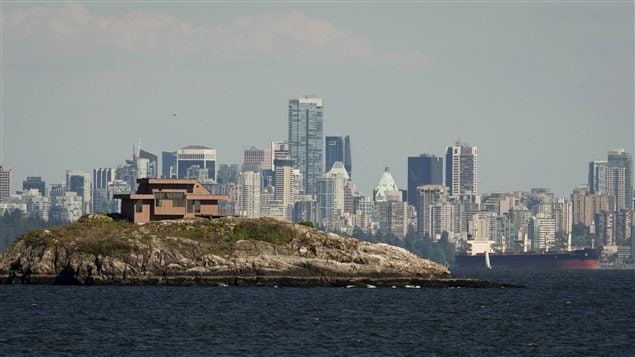 Downtown Vancouver is seen in the background as a house sits on top of a small island in West Vancouver, B.C., on June 10, 2013. Vancouver is the second most unaffordable housing market in the world after Hong Kong, according to a new study of major property markets.
Photo Credit: PC / JONATHAN HAYWARD

According to the study, the majority of houses in the city’s affluent western neighbourhoods have been bought by Chinese immigrants, many of whom don’t earn their living here.

David Eby, the New Democratic Party (NDP) member of the provincial legislature for the riding of Vancouver-Point Grey, said he asked Andy Yan, a University of British Columbia adjunct planning professor and a real estate analyst, to look into the issue after receiving several complaints from his constituents.

“I’ve had a number of constituents in community approach me and say they are concerned about vacant homes in the community, about older homes being torn down new homes being built in their place and nobody moving in,” Eby said. “They’ve been concerned about the disconnect between the price of housing in Vancouver and the amount of money people can actually make in Vancouver.”

Many feel priced out of the market

Eby said many of his constituents simply feel priced out of the market.

Yan analyzed data from 172 real-estate transactions in three neighbourhoods on Vancouver’s west side from August, 2014, to February, 2015.

The study found that two-thirds of all sales of detached houses in the University Endowment Lands, Dunbar and Point Grey neighbourhoods were purchased by recent immigrants, most likely from mainland China. That group purchased 88 per cent of houses priced at more than $5-million.

Another interesting discovery was that on titles held by a single owner, the most common occupation was homemaker, while 18 per cent were business people and 6 per cent of owners were students.

Eby said the issue is so acute that it could affect the future of the economy in B.C.’s lower mainland.

Eby said this latest study is another piece in the puzzle that helps policy makers to see the impact of foreign capital on Vancouver’s overheated housing market.

He said in the past attempts to find a solution to Vancouver’s housing crisis have been stymied by reluctance on provincial and federal government levels to acknowledge that foreign capital is having any  real impact on the market.

B.C. Premier Christy Clark has said there is no evidence that wealthy foreign buyers are driving up prices and therefore no reason to introduce measures such as a luxury tax.