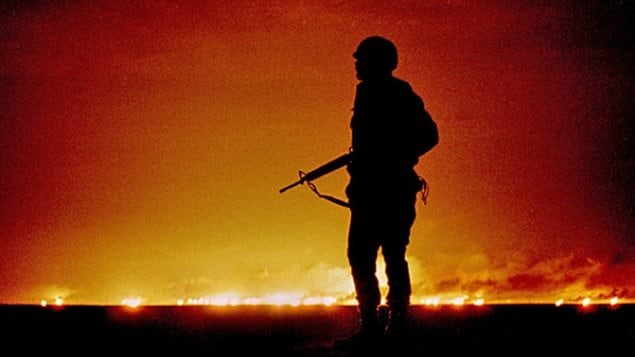 In 1990, after a long-standing feud with neighbouring Kuwait, Saddam Hussein’s Iraqi army invaded the country.

Iraq had accused Kuwait of slant drilling into Iraq’s Rumaila oil field, and then of overproducing oil beyond OPEC treaty limits, causing a drop in world oil prices.

This was the beginning of the Gulf War.  As the American led allies became involved and began advancing toward Iraq, the retreating Iraqis began setting fire to the oil wells and to lakes and trenches of oil they had created.

By February 1991, the fires were ignited by the retreating Iraqis in an effort to destroy Kuwait’s oil infrastructure and to slow the advancing allies. To some extent the delay worked, but the fires of over 600 wells and oil ponds created an environmental disaster of epic proportions.

Specialized oil well experts were brought in to quell the fires.  At first four major US companies were contracted and some from other countries including Kuwait, and then the Canadians were called.

Canada extinguishes the most, and the last fire

SafetyBOSS of Calgary  became the leading effort, and although called in last, ended up capping the most wells,  although all efforts were initially slowed by landmines around the sites which had to be cleared first at a high degree of danger.

SafetyBOSS  were greatly aided in their efforts by their use of their own creation of the “Smokey” fire trucks and systems.

In the end the Canadian company capped 180 of the some 600 wells, setting a rapid pace the other companies could not match. The fires, which had estimated would burn for three to five years, were put out in a matter of months.

The last fire was put out by Canada’s SafetyBOSS on November 6, 1991. The company had set up its equipment and plan so that the last fire would be extinguished by the push of a button, and prepared the honour for the Emir of Kuwait.