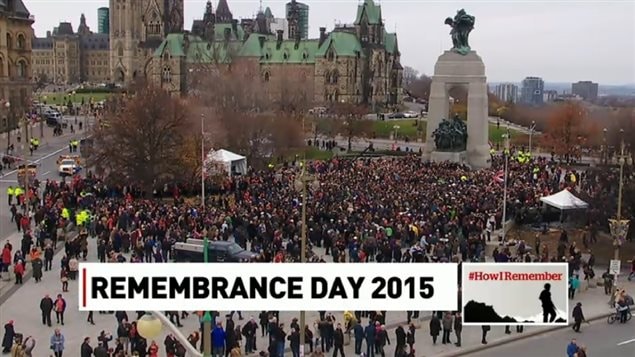 Tens of thousands of Canadians attended this year's Rememberance service in Ottawa at the National War Memorial in Ottawa.
Photo Credit: CBC

November 11th, is the national day of remembrance in Canada. It’s a time to honour and reflect on all those Canadians who served in war and conflicts, and made the ultimate sacrifice.

It began a year after the end of the First World War. Sir Percy FitzPatrick, a South African born author who had lost his son in the war had suggested the pause in daily activities and a moment of silence in a letter to King George V.

Sir Percy had been greatly impressed by what he had seen in Cape Town. There, a daily silence began to be observed starting in May 1918 during the firing of the daily noon gun in which a minute of silence was observed to remember the fallen, followed by a second minute of silence to think of their families.

The entire city came to a standstill at the sound of the gun, and the strains of the “Last Post” played by a piper on the top of a major building in the city centre. The piper would then play “Reveille” to mark the end of the silence.

The King thought this was a worthy cause and sent a letter to the Governors-General in all countries in the Empire, who in turn passed it to their respective governments.

On November 6 1919,  Sir George Foster, who was Canada’s acting Prime Minister at the time, rose in the House of Commons in Ottawa to read the message from the King. The following day the proclamation was published in most newspapers.

“ To all my people: Tuesday next, 11 November, is the first anniversary of the armistice, which stayed the worldwide carnage of the four preceding years and the victory of Right and Freedom. I believe that my people in every part of the Empire fervently wish to perpetuate the meaning of the Great Deliverance, and of those who laid down their lives to achieve it.

To afford an opportunity for the universal expression of their feeling, it is my desire and hope that at the hour when the Armistice comes into force, the eleventh hour of the eleventh day of the eleventh month, there may be for a brief space of two minutes, a complete suspension of all our normal activities. During that time, except in the rare cases where this may be impracticable, all work, all sound, all locomotion should cease, so that in perfect stillness the thoughts of every one may be concentrated on reverent remembrance of the glorious dead.”

No elaborate organization appears to be necessary. At a given signal, which can be easily arranged to suit the circumstances of each locality, I believe that we shall all gladly interrupt our business and pleasure whatever it may be and unite in this simple service of silence and remembrance.”

King George’s letter was accompanied by further instructions from the Secretary of State for the Colonies, outlining how to implement the moment of silence.

“This will be published in the Press here tomorrow morning. Arrangements are being made for the general observance of the two minutes silence at eleven o’clock next Tuesday. Trains will be stopped on the railways, traffic on the streets, ships as far as possible at sea, and every effort will be made to get work suspended everywhere, in schools, shops, mines, and factories and to ensure complete silence.”

Prime Minister Foster then said that the King’s wishes will be observed throughout Canada and the first Armistice day of remembrance occurred in Canada, as elsewhere in the Empire, on November 11th 1919.

In 1921, the day was declared a legal holiday called Armistice Day.  For the first few years, the day was combined with Thanksgiving and held on the Monday of the week closest to November 11th.  However, lobbying efforts by veterans groups wanted the ceremonies held on the actual day. Ten years later in 1931, the name was changed to Remembrance Day and fixed to be held on November 11th.

For several decades later, all activity did stop throughout Canada wherever people were, although perhaps sadly that is no longer the case. Although still a holiday for people working in federal jobs, (the time off given to enable attendance at ceremonies), for most people regular activities and commerce continues.  Nonetheless, attendance at Remembrance Ceremonies across Canada seems to be increasing in recent years.