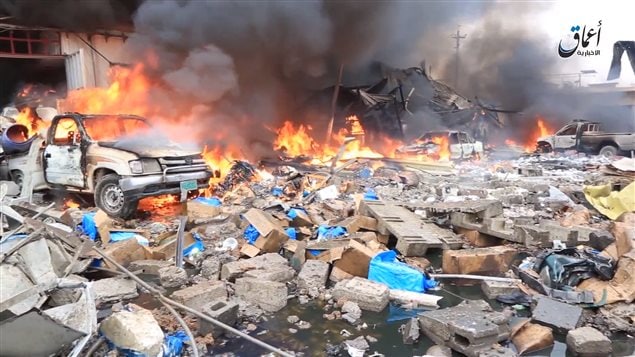 A still image from an ISIS video posted online showing what is alleged to be the aftermath of a Canadian airstrike in northern Iraq on Nov. 19, 2015. The bombardment hit an ISIS bomb-making factory in Mosul, but local news agencies allege it also killed 10 civilian workers at a nearby dairy and ice cream factory. (Courtesy of Airwars.org)
Photo Credit: (Courtesy of Airwars.org)

The Canadian military is denying reports that its airstrike against an ISIS bomb-making factory in the northern Iraqi city of Mosul last week also killed at least five civilians injured and 20 others in a nearby dairy and ice cream factory.

“The CAF’s review of the November 19, 2015 air strike in Mosul did not reveal any information to suggest that civilians had been harmed or killed. The nearest structure to the strike was well outside of the explosive radius of the weapons used‎.”

Chris Woods, a London-based investigative journalist who leads Airwars, a project that monitors civilian casualty allegations in the conflict, said in an interview with RCI that information about civilian casualties following the Canadian air strike came from a number of independent sources and did seem quite credible.

“We’ve been looking today at very graphic video footage released by Islamic State, by Daesh, which shows not only the apparently destroyed bomb factory but also a very badly damaged building next door and this appears to be the dairy factory that people of Mosul say was also hit,” Woods said.

When asked by RCI to comment on the video published by ISIS, the Canadian military sent the following written statement: “The Canadian Armed Forces is aware that ISIS distributes videos and images with the deliberate intent of spreading mis-information and pursuing their objectives. As such, it is important to question the credibility of any such products distributed by ISIS.”

While praising Canada for taking great care to not to target civilians, Woods criticized Canadian protocols for investigating allegations of civilian casualties.

“What I would say is that there are significant limitations if Canada is only making these civilian casualty assessments by looking at its own footage from the air, that’s just not good enough,” said Woods.

He cited a recent CBC investigative report by the fifth estate, claiming that Canada’s investigations into reports of civilian casualties from its air strikes are very weak.

“There is no real follow with witnesses, there have been no attempt to look at anything other than this footage shot from the aircraft,” Woods said. “On the ground it’s a very different story, of course you get blast damage, shrapnel fragments, fires and so on, none of which is maybe visible from an aircraft 10,000 feet up in the sky.”

“It’s not good enough to just look at footage from the air, there needs to be some kind of engagement on the ground and some kind of proper follow up of what we think are likely credible allegations,” Woods said.

“Whenever we obtain new information regarding potential allegations of civilian casualties, we conduct a review of all available information,” wrote Capt. Sullivan. “Anyone with information that would indicate potential civilian casualties as a result of any airstrike by CF-18 Hornets during Operation IMPACT is encouraged to provide it to the CAF so we can review it with the Coalition.”

Capt. Sullivan said concerned members of the public can contact the Public Inquiries Desk of the Department of National Defence by phone +1-613-947-6006 or by email: Information@forces.gc.ca.

“Should there ever be a credible allegation of civilian casualties resulting from this or any other CF-18 airstrike during Operation IMPACT, the CAF will investigate thoroughly with coalition partners and provide as much information as possible to Canadians without compromising the safety and security of our operations and personnel.”

Of those, 1,141 were combat missions by CF-18 fighters, but about two-thirds of the time Canadian jets return to base without dropping bombs, owing to what officials describe as Canada’s careful approach to avoid civilian casualties.

Prime Minister Justin Trudeau has vowed to pull the Canadian fighter jets from the region despite calls for increased military pressure on ISIS following the deadly attacks in Paris that killed 130 people.

Interestingly enough his group has not yet received a greater number of allegations of civilian casualties after the ramp-up of air strikes on ISIS targets in Syria following the downing of the Russian passenger jet over Sinai and the Paris attacks, Woods said.

“That said there is often a time lag, it can take days and even weeks for these claims to get out of areas that are occupied by the Islamic State,” Woods said. “It’s very dangerous and risky for civilians to get the photos and videos.”

Woods said he is also worried about the recent campaign by the Islamic State to target and kill Internet activists, citizen reporters, who’ve been documenting not only civilian casualties caused by coalition airstrikes but also Iraqi government bombardment or by ISIS itself.

“We’ve heard that dozens of young media activists have been murdered by the terror movement because they don’t like what they are saying about ISIL,” Woods said. “Unfortunately, those same people were very good witnesses on what the coalition was doing as well.”