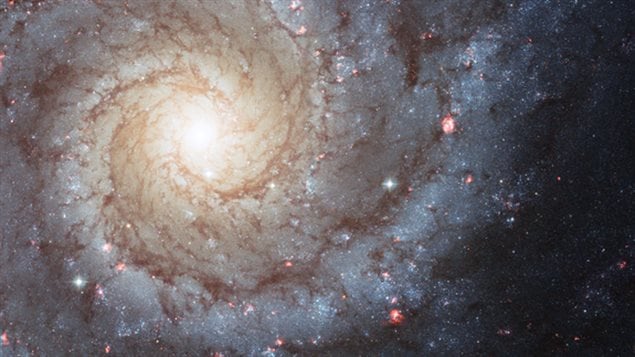 This Hubble Space Telescope photo of Messier 74 reminds us that spiral galaxies are some of the most beautiful and photogenic residents of the universe. Nearly 70 percent of the galaxies closest to the Milky Way are spirals. New research finds that spiral arms are self-perpetuating, persistent, and surprisingly long lived. Image released April 2, 2013.
Photo Credit: NASA/ESA/Hubble Heritage Team

Putting a new spin on galaxies

A university researcher in Ontario has shaken up the world of astrophysics recently.

George Conidis is a York University PhD candidate in astrophysics. who has just received a prestigious MITACS* award this week for his work in understanding the universe.

He discovered some outer-lying groupings of galaxies similar to ours and has modified thinking on how galaxies affect each other.

Working under the guidance of York University Professor Marshall McCall in the Department of Physics and Astronomy and with help from  Prof. Michael Richer of National Autonomous University of Mexico, Institute of Astronomy, Conidis developed his own pattern recognition software in order to filter through a million known galaxies and measured how they spin.

He also discovered that they exert the intergalactic equivalent of tidal pull,  affecting their shape and alignment in relation to each other.

Previously it was believed that spinning galaxies were more or less aligned in an orderly manner in relation to each other, sort of “standing on end” as it were, but McCall and now Conidis have shown this is not the case.

Rather, the galaxies exert unequal forces on each other and the alignments are ordered but galaxies are found to be at an angle to each other, a result which was not expected.

Conidis was also able to develop the software and gather the data to show how the galaxies were spinning in 3D. This information is now being combined with 3D computerized simulation to better understand the behaviour and influence of galaxies on each other .

Conidis points out that our own Milky Way, and the neighbouring Andromeda galaxy, both huge, have had a significant influence on the orientation of other galaxies. In about 4 billion years these two will collide, or more correctly, merge to form an elliptical galaxy. There are in fact more elliptical galaxies than disc galaxies, as they have merged over billions of years since the big bang.

Conidis also says his discovery helps shed additional light on the formation of our own galaxy. He notes that new advances in computer technology are enabling researchers such as himself to sift through vast amounts of data to answer questions that have remained long unanswered, and to correct or modify previous assumptions about the universe such as his new discovery about galaxy orientation in their environment.

* Mitacs, a national, not-for-profit organization that partners companies, government, and academia to promote Canadian research and training. The Mitacs Award for Outstanding Innovation – PhD is presented to a PhD student who has made a significant achievement in research and development innovation while participating in a Mitacs-funded program. Conidis is one of seven Mitacs award winners nationally, chosen from thousands of researchers who take part in Mitacs programs each year. The remaining six recipients were recognized for outstanding innovation, commercialization or exceptional leadership in other areas of research.