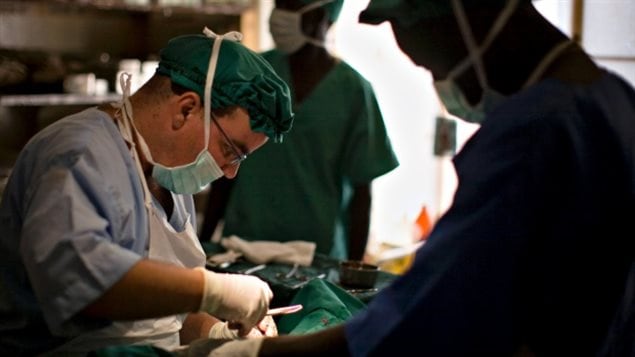 A surgeon with Doctors Without Borders operates on a patient in the town of Nasir in southeastern Sudan in June 2009. In August, the humanitarian group said two of aid workers had been killed in South Sudan's troubled Unity region. Two of its local workers were killed in fighting between rival factions in south Sudan in August 2015. A recent lawsuit over security issues may have many international aid groups rethinking policies and contributions.
Photo Credit: Finbarr O'Reilly/Reuters)

It is believed to be the first case of it’s kind in the world of international aid, and with potentially major implications.

Alleging lapses in security and other issues, a Canadian working with a Norwegian NGO has successfully sued the agency after he was wounded and kidnapped in Kenya near the Somali border in 2012.

Will this have a chill effect on international aid work, or even other areas like international reporters working in conflict zones.

Stephen Brown (PhD) has published several books on  Canada and foreign aid issues. He is a professor of Political Science at the University of Ottawa, and member of the Mcleod Group concerned with foreign policy relating to international cooperation, sustainable development, human rights, and equality.

Steve Dennis is a Canadian from Richmond Hill, near Toronto, Ontario.  An experienced field project worker in Africa and elsewhere, in 2012 he was working for the non-governmental aid agency  the Norwegian Refugee Council (NRC). In June that year, whild travelling in a convoy, he and three others, including another Canadian, Qurat-Ul-Ain Sadozai were kidnapped by armed rebels.

During the shooting of the convoy, a driver was killed and Dennis was wounded in the thigh. The rebels then marched their hostages three days over the border into Somalia before being rescued by pro-government Somali militia.

The wound  has left him with muscle loss and chronic weakness, and he says PTSD left him unable to work.

His lawsuit in Norway alleged the NRC was grossly negligent and ignored their own security rules thereby leaving employees vulnerable.  He also claimed the NRC had failed to properly care for him and compensate him for his wounds.  A longtime international aid worker, he says this incident has left him with post-traumatic stress disorder and unable to return to aid work.

The Norwegian court agreed with Dennis and issued a scathing verdict saying the agency was :”grossly negligent” and that the court also cited the NRC treatment of employees, noting evidence from others involved in the incident who were highly critical of their subsequent treatment by the NGO. They said the agency had labelled them as “troublemakers’ for expressing their criticism internally in the organization.

The IRIN news agency for humanitarian news and analysis in its coverage of the ruling calls it, “a case with far-reaching implications for security in the aid industry’.”

Professor Brown says it is still too early to know, but that likely costs will go up for aid agencies, meaning more of money from government grants and individual donations will likely go to “overhead” for security, insurance, and better post-mission psychological and/or medical treatment for workers.  There are also possible implications for other groups sent into conflict areas, such as reporters and their news agencies.

Although the Norwegian court held NRC responsible, it did not grant Dennis the full amount of over 11-thousand Krone he sought, instead  awarding 4.4 thousand Krone, or roughly the equivalent of C$680,000.

The NRC released a statement saying it regretted the loss and suffering by NRC staff. It also said it will review the verdict before decided whether to appeal.

In either case, the reverberations are already being felt in the worldwide aid community, where agencies are beginning to reconsider issues mentioned by Professor Brown, such as insurance, security policies, and care for aid workers following deployments.