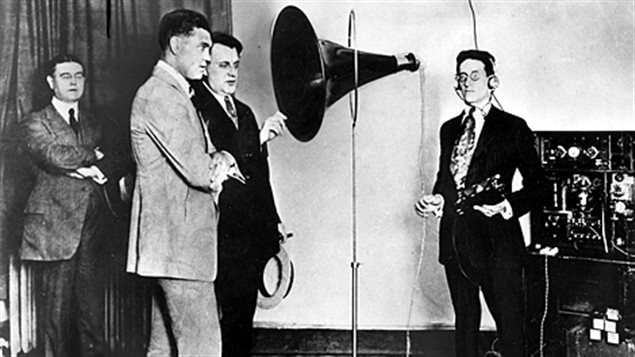 Famous heavyweight boxer Jack Dempsey speaks into the microphone at radio CFCF in 1922 during a stop in Montreal
Photo Credit: Library and Archives Canada C-066695

Radio as we know it was first created by Reginald Fessenden, a Canadian working in the US. And although many sites list an American station as the first broadcaster, in fact it was a station in Canada, XWA that was granted the first broadcast licence on this day December 1st,  back in 1919.

XWA, was a Marconi station in Montreal and the call letters stood for “experimental wireless apparatus”.

The first scheduled broadcast was in May 1920, also predating American broadcasts becoming the oldest radio station in the world, although actual broadcasts were very limited, and nothing like the 24/7 operations of today.

It remained a highly popular radio station and changed owners over the years, and call letters as well.

In 1991 it was CIQC, and a news format. In 2005, another format change to news-talk, and in 2008 a switch to all-hits radio.  But AM radio was dying, and in Montreal a percentage of the Anglophone audience had moved out of Montreal and the mainly French-speaking province.

With the combined factors of a reduced audience, the fading of AM radio in popularity generally,  and its remaining audience split amongst several competitors, there was clearly trouble on the horizon by the 2008 switch to all hits music.

In 2010, using the call sign CINW 940AM, owners Corus Entertainment shut the operation on January 29th.  At 10;00 am the programming ceased and looped messages were played explaining  that given “current economic conditions” continuing to broadcast was impossible.

At 7.02 that evening, the broadcasts simply stopped and the first and oldest of radio stations, certainly in North America, and possibly the world , went silent.