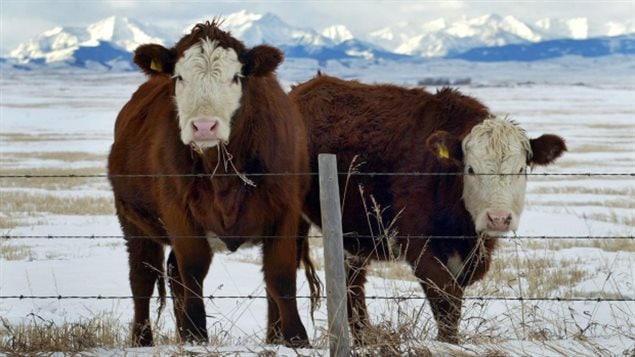 An investigation of a case of mad cow disease points to "pre-regulation" contaminated feed left over on the farm where the animal was born. It can take up to 5 or 6 years before symptoms of BSE become obvious in cattle
Photo Credit: Jeff McIntosh/Canadian Press

It’s known as “Case-19”.  The pure bred Angus beef cow was born in 2009 euthanized in February this year after is became unable to stand properly. Several tests later confirmed the problem as Bovine Spongiform Encephalopathy (BSE) or “mad cow disease.”

It was the first case of BSE since 2011 and Case-18.  In this case, the animal was put down on another farm, but investigation showed it was born on the same farm as another animal put down in 2010, which is known as Case-17.

The Canadian Food Inspection Agency (CFIA) completed its investigation  in November. The report  points to feed contamination, i.e. protein feed left over on the farm, after strict new regulations came into effect.  It is suspected that the possibly infected feed came from a producer which supplied food to the farm and for Case-17, but which at the time of that investigation was already no longer in business.

In the past, dead farm animals were sometimes used as protein sources in animal feed. Thus a sheep that died of scrapie (similar to BSE) or a cow which died of BSE could end up in cattle and animal feed, with the potential to infect other animals.

As BSE concentrates in the brains and spinal cord, new federal regulations had been put in place in 1997 to ban most proteins and especially these “specified risk material” (SRM) from cattle feed. In 2007, following other mad cow cases,  SRM was also banned from all animal feed, pet food, and fertilizers as part of an “Enhanced Feed Ban (EFB).

The BSE protection measures have greatly reduced incidence of BSE. Given the long incubation time, it is expected that by 2016 the new measures will prevent more than 99 percent of potential BSE from entering the feed system and eradicate BSE in Canada

Due to its now stringent regulations toward eradication of BSE, Canada is officially categorized under the OIE’s (World Organisation for Animal Health) science-based system as a controlled BSE risk country.