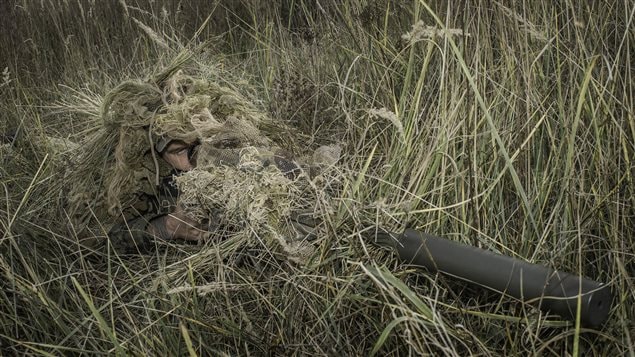 A sniper from Joint Task Force Ukraine takes a concealed position prior to shooting on a range with a C14 Timberwolf rifle at the International Peacekeeping and Security Centre (IPSC) in Starychi, Ukraine on November 2, 2015 during during Operation UNIFIER.
Photo Credit: Canadian Forces Combat Camera, DND

Canadian and Ukrainian soldiers learn from each other’s experiences

Lt.-Col. Jason Guiney knew he had a lot to offer when he was appointed commander of the Joint Task Force Ukraine.

A veteran of four operational deployments – to East Africa with the United Nations in 1999, Haiti in 2004, Pakistan with the Dis­as­ter Assis­tance Relief Team in 2005, and Afghanistan in 2008-2009 – Lt.-Col. Guiney brought a wealth of experience to his new job.

He commands about 180 Canadian soldiers stationed in western Ukraine – many veterans of the war in Afghanistan and other international deployemnts.

Their task is to train Ukrainian soldiers to take on the Russian-backed rebels if the bloody civil war in eastern Ukraine flares up again into full-scale fighting.

Still the Canadian soldiers realize they can learn a great deal from the Ukrainian military’s experience, Lt.-Col. Guiney said.

“Although they have learned a lot of skills from us, I think we have learned equally as much from them about the type of threat they face on the front lines,” Lt.-Col. Guiney said. “What they are facing is what we refer to as a hybrid threat; so it’s a mix of conventional tactics, insurgency tactics coupled with modern technology. There are modern main battle tanks, electronic warfare, jamming, use of drones, cyber attacks, and these are all valuable lessons for the Canadian military because these are threats that we have not faced ourselves.”

(click to listen to the interview with Lt.-Col. Jason Guiney)

They are the boots on the ground in the Operation UNIFIER, “Canada’s contribution to support Ukrainian forces through capacity building, in coordination with the U.S. and other countries providing similar training assistance.”

The Canadian soldiers are spread out in three key locations, Lt.-Col. Guiney said. The main component of the training takes place at the International Peacekeeping and Security Centre (IPSC) in Starychi, in western Ukraine, near the border with Poland. About 150 Canadian soldiers there conduct infantry and medical training, Lt.-Col. Guiney said. They live in Soviet-style open barracks of the Ukrainian military, he said.

Another 20 Canadian soldiers are based in southern Ukraine at the Ukrainian Ministry of Defence Demining Centre in Kamyanets-Podilsky, teaching counter-improvised explosives and bomb disposal skills. And on a periodic basis, there is a small team of military police trainers in the Ukrainian capital Kiev, Lt.-Col. Guiney said.

“The infantry training pillar consists of everything from basic soldiers’ skills from marksmanship and rifle shooting, patrolling, all the way up to mechanized tactics with armoured personnel vehicles,” Lt.-Col. Guiney said. “And an important part of that infantry training is medical training. We actually teach the Ukrainians roughly the same medical skillsets, the same medical course that we ran for our soldiers in Afghanistan.”

Lt.-Col. Guiney said there have been about 500 cases of improvised explosive devices (IEDs) in Ukraine since January 2014 and the bomb disposal training team in Kamyanets-Podilsky makes a very important contribution to the ability of the Ukrainian armed forces to respond to this kind of threats.

“We teach them how to effectively find and neutralise these kinds of bombs, which are very lethal,” Lt.-Col. Guiney said. “And this is also tied to Global Affairs Canada equipment donation, where Canada purchased $3.5 million of counter-IED equipment, such us bomb suits and bomb disposal robots. And I’m very happy to report that this equipment is now being employed in the Donbass region to help clean up the battlefields.”

The Ukrainian soldiers that the Canadians are training come from the Ukrainian army and for most part have rotated right out of the frontlines of the Donbass region, he said.

“What we’ve found that there is a good mix of experience, everything from veterans who’ve been on the frontlines for the better part of the year to troops that have just a few weeks of training,” Lt.-Col. Guiney said. “So it’s been a little bit of a challenge for us to make sure that we can adapt our training to meet all the skill levels.”

“I think especially the combat veterans, they really appreciate and see the value of the skills that we deliver to them, because they know that this training is extremely helpful to them on the frontlines,” he said.

The biggest challenge the Canadians have had so far in training their Ukrainian counterparts is the difference in the military culture, Lt.-Col. Guiney said.

“The Ukrainian army is very much organized and trained, and uses Soviet-style doctrine,” Lt.-Col. Guiney said. “And that’s remarkably different from Western or Canadian doctrine.”

For example, under the old Soviet model, decision-making was centralised at the highest levels of command, their non-commissioned officers – the sergeants and the warrant officers – didn’t have a lot of room for decision-making or initiative, which is the complete opposite of the Canadian military that relies on the expertise of its sergeants, Lt.-Col. Guiney said.

“What’s been great about showing them how we do business is that they’ve seen the value in developing their non-commissioned officers,”Lt.-Col. Guiney said. “And in fact, over the past five months, they have asked us if could modernize their junior leadership that way. So right now, we are running a junior leadership academy in Starychi.”

Over the next months Canadians will concentrate on helping the Ukrainian military to develop their instructional cadre so when the Canadian mission ends, they leave a legacy in which the Ukranian military can sustain their own training, Lt.-Col. Guiney said.

“It’s been great for me, because this training mission is something very different from anything I’ve ever done in the military,” Lt.-Col. Guiney said.

Since January 2014, the federal government has announced more than $700 million in additional assistance to Ukraine that include a broad range of initiatives to “strengthen security, promote economic stability and growth, advance democracy, human rights, rule of law, and to promote a civil society,” according to government officials.