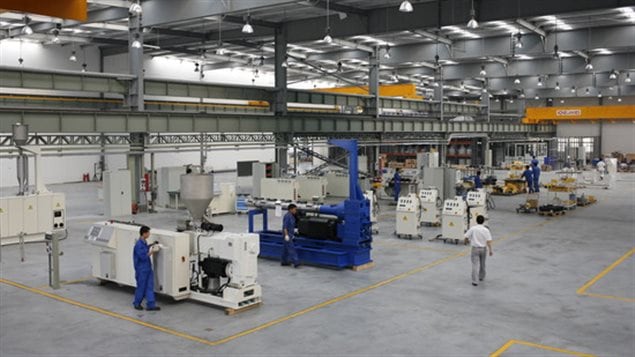 Krauss-Maffei of Germany is a high-tech machinery maker, specializing in plastic and rubber injections and with plants in many countries around the world. It is yet another major manufacturing name purchased by a Chinese company. Cost was over a billion dollars.
Photo Credit: KraussMaffei

China has just acquired Krauss-Maffei a major German machinery maker. Krauss-Maffei is one of many multi-national industrial firms now owned by China which has been quietly acquiring a variety of assets around the world.

Some experts are concerned.

Michel Juneau-Katsuya is the CEO of the Northgate Group, a security and intelligence consulting firm. He is also a former senior intelligence manager, Chief of the Asia-Pacific sector in the Canadian Security Intelligence Service (CSIS).

In recent years, Chinese state-controlled companies have been buying major domestic and international companies at a steady rate.

China recently bought Germany’s Krauss Maffei at a cost of about  a billion dollars.

Indeed recently US president Obama had to forego the traditional Presidential stay at the iconic Waldorf Astoria  over security concerns at the now Chinese-owned hotel.

Then there is the huge new naval centre being built in Djibouti which many would classify as a military base, and which could control one of the worlds biggest shipping routes through the Red Sea. Many other joint ventures to develop port facilities with countries around the world are theoretically for economic advantage for China and the host country, but security experts also note the potential for international political influence and the military overtones.

In his CSIS report on Chinese influence, Mr Juneau-Katsuya said Chinese policy was like that of  Sun Tzu (c 509 B.C) in his treatise- The Art of War:  “Be so subtle that you are invisible.  Be so mysterious that you are intangible. Then you will control your rival’s fate.”

Chinese influence now extends deep into world resource industries, land and food control, financial institutions, manufacturing, technology, genetic research , cultural businesses, and much more. In addition to the instant acquisition of technological information and industrial secrets, he says all of these can be translated into political influence, both domestically and to the international foreign policies of those countries.

Indeed almost all of Chinese major acquisitions are barely noted by politicians or the media.

He notes that China’s policy also seems to be based on the ancient Chinese game of GO where the object is to control the most territory on the board.  It is a game described on one website as “rewarding patience and balance ….. a strong player must be prepared to be flexible but resolute.”

Juneau-Katsuya says one problem is that western democracies and policies operate on short time-scales and are focussed on the “next election”, whereas Chinese strategy is long-term. He also says the majority of western politicians simply can’t understand that China doesn’t play by “western rules” and that many politicians and those in other influential positions often don’t even realize they are being manipulated.