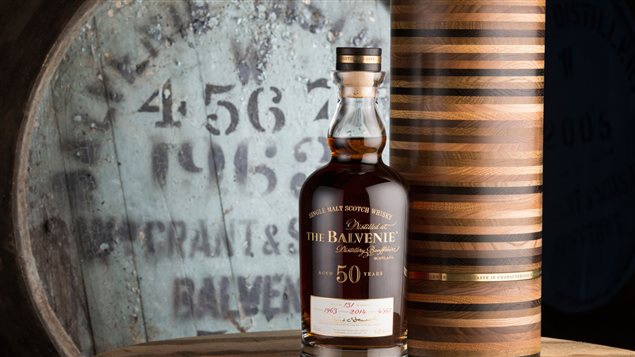 Only one bottle of the 50-year-old whisky from Scotland's Balvenie Distillery is available in Canada. A lottery will be held tonight for the $45,000 bottle.
Photo Credit: Balvenie

O rare bottle, one only for all of Canada

Canadian aficionados of the “water of life”, at least well-to-do ones, are very interested in a very special bottle of whisky.

On May 28th in 1963, the famous Scottish distillery Balvenie placed a special batch of their product in cask 4567.  Fifty years later it was hand-poured into special hand-blown bottles. Only 131 bottles of the aromatic liquid have been put up for sale in special locations around the world.

“There is no bad whiskey. There are only some whiskeys that aren’t as good as others.”
― Raymond Chandler

Only one of those, bottle number 68, is now available in Canada and the price tag is $45,000, or roughly $2,000 per ounce.  Indeed, it is one of the last ones available anywhere in the world.

Too much of anything is bad, but too much good whiskey is barely enough.”
― Mark Twain

The unique bottle has been sent to Vancouver as a Balvenie brand ambasadro explained,

“There’s a very discerning palate in all of Canada but Vancouver particularly”.

Speaking to Radio-Canada, drinks expert Bruno Gerves said that as whisky ages, both the alcohol and water evaporate and as they do, the  concentration of various aromies in the whisky come out more and more. The whisky also gets smoother and doesn’t burn your throat.

But with only one bottle, and so many eager to get it. The unique bottle will be sold by a lottery. People put forward their names at the provincial liquor store on Cambie Street in Vancouver.