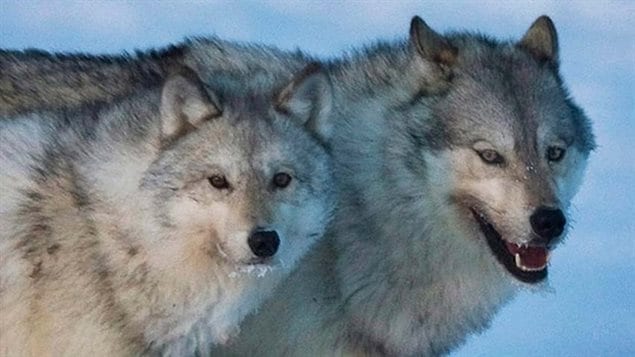 Conservation groups have launched a legal challenge against British Columbia’s plans to kill wolves as a way to save the dwindling mountain caribou.
Photo Credit: Nathan Denette/Canadian Press

Wolves to be killed by shooters in helicopters

In the west coast province of British Columbia, the mountain caribou herds are dwindling rapidly.

Wolves kill caribou, so the province began a programme of killing wolves in 2015 with the stated goal of reducing predatory pressure on the herds so they could recover.

Last year despite protests, some 84 wolves were killed by shooters firing from helicopters.

Now two Canadian environmental groups with the backing of several other national and international conservation groups have filed a lawsuit challenging the legality of the multi-year cull programme. It is expected that up to 500 wolves will be killed in the South Peace and South Selkirk regions of the province during the 5 year programme.  The legal challenge was brought in anticipation of new culling permits being issued this month in the South Selkirk region.

The groups, Pacific Wild and the Valhalla Wilderness Society, with the backing of  the Association for the Protection of Fur-Bearing Animals, the Wilderness Committee, Humane Society International/Canada, and various others say the wolf cull is unreasonable, unnecessary and scientifically unfounded.

They say what is needed is for the easily stressed caribou is for more habitat to be set aside free from commercial development activities.

“To date, the province has neglected to protect and restore sufficient habitat for endangered caribou,” Ian McAllister-Pacific Wild

In a press release on Wednesday, the two groups say the B.C. Ministry of Environment’s own briefing notes suggest the government was prompted by a forest industry opposed to giving up more land to habitat protection efforts.  The suggestion was brought to light last fall through a freedom of information request filed by Wilderness Committee.

Ian McAllister, executive director of Pacific Wild is quoted saying “We are asking the court to review whether, in the absence of sufficient, enforced habitat protection, culling wolves constitutes ‘proper wildlife management’.”

The challenge seeks a court determination of whether the wolf cull constitutes “proper wildlife management.

They suggest the cull is being conducted by the government in order to avoid setting aside more critical mountain caribou habitat necessary for their survival and recovery, thereby preventing those areas from being exploited by forestry companies.

The provincial plan involves hiring contractors to attach radio-collars to wolves in the spring so that entire packs can be tracked and shot from helicopters throughout the winter.

Gabriel Wildgen, campaign manager at Humane Society International/Canada, one of the supporters of the legal challenge is quoted in the press release saying, “The B.C. government is pandering to industrial interests, endangering the few remaining mountain caribou, and sacrificing wolves in the process”.