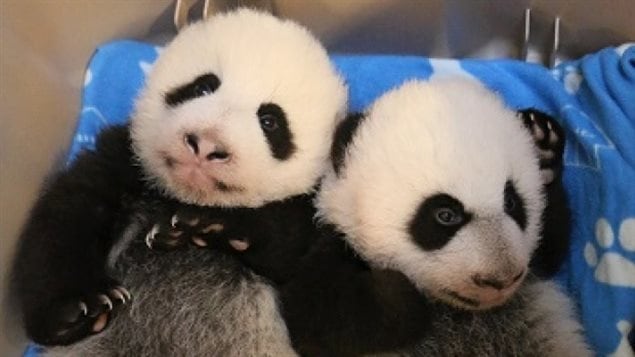 The first giant panda cubs born in Canada have been nominated for a 2015 Panda Cub of the Year, reports CBC News. The twins turned 100 days old on January 20th. They were born to Er Shun, one of two giant pandas that were loaned to the Toronto Zoo by China and she herself has been nominated for an award by GiantPandaGloba.com. The zoo tweeted a request that people vote for them.

The babies, who have not been named, are not visible to the public but the zoo released a video and news release that said, “The 100 day celebration follows an ancient Chinese tradition that when a child reaches his or her 100th day of life, he or she has survived the risky fragility of infancy and may be considered on track for a successful future.”

Born naked and weighing just over 187 grams each, the cubs are now fuzzy and bear the characteristic black and white markings. The public should get to see them in mid-March.

Hosting the pandas is an expensive proposition. The new pandas, like the two adults, are rented from China. RCI’s Marc Montgomery detailed the costs which add up to about $2.5 million a year for the adults and an extra $600,000 for each cub. The zoo is also soliciting donations “to support our work in giant panda conservation.”

Usually the cubs are returned to China after two years. The adults will move to the Calgary Zoo in western Canada in 2018.