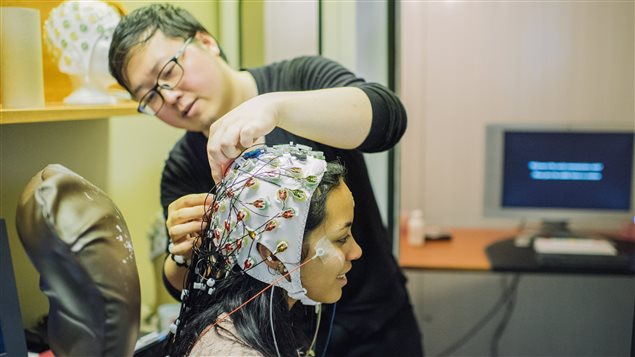 It seems that ancient survival and communal adaptations still lurk in our brains.

Research at McGill University in Montreal has found that people can detect the meaning and intent of non-speech vocalizations,, grunts, laughter, moans, growls etc, virtually instantaneously, faster than spoken words, that is to say, the emotion being expressed.

The research involved playing vocalized sounds to subjects whose brain activity was being monitored.

What the researchers were looking for was

The findings were published in the science journal,  Biological Psychology, under the title, “Preferential decoding of emotion from human non-linguistic vocalizations versus speech prosody”.

Some 24 subjects were tested using three basic emotions of anger, sadness, and happiness.

Using a random mix of vocalizations and words, the subject were to identify the emotions being expressed while an EEG monitored brain activity to see how quickly and in what way the brain reacted.   Nonsense speech was used to avoid any actual linguistic cues, ie “He placktered the tozz”.

They found for example that certain non-speech sounds are universal across cultures, such as a hearty laugh, and that emotional intent can be detected by the subject within a mere fraction of a second, a tenth of a second to be exact.

“The identification of emotional vocalizations depends on systems in the brain that are older in evolutionary terms,” says Marc Pell, lead author on the study. ”Understanding emotions expressed in spoken language, on the other hand, involves more recent brain systems that have evolved as human language developed.”

Another interesting finding is that detecting the emotion of happiness was even faster than sadness or anger, but that anger  produced longer lasting activity, suggesting again an ancient evolutionary mechanism to pay more importance to anger signals.

They also found that people who have a tendency towards being anxious also tend to have faster and more heightened responses to all of the emotional signals.

Professor Pell says the study shows  the voice conveys much rich information to others and he hopes it shows how powerful the voice is.

He says his lab will continue to look at vocalzations and emotional speech, with a more in depth look at interpretations across cultures, and to what extent interpretation of sounds is learned.

The research was funded by Natural Sciences and Engineering Research Council of Canada.