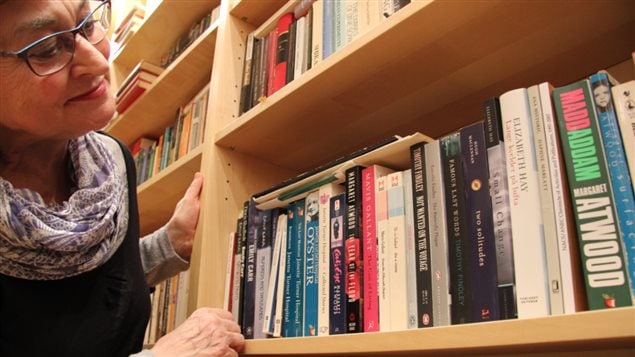 “(Canada) is a country and a culture that we have a lot in common with in Norway and that people should know more about,” says Norwegian writer Gerd Bjørhovde. (Eilís Quinn/Eye on the Arctic)

Norwegian writer and retired literature professor Gerd Bjørhovde has always had a thing for Canada.

And there is only one person to blame for it, she says;  Canadian author Margaret Laurence.

“I was so fascinated with her writing,” Bjørhovde says.

“She is a wonderful storyteller for one thing. But it was also her interest in identity – I’m thinking of the novel The Diviners which, among many other things, is about Métis identity and the many ethnic backgrounds that people in Canada may have, and I felt that was fascinating.”

The discovery of Laurence’s work led Bjørhovde to a life-long fascination with Canada and Canadian literature.

The bookshelves of her home in the Arctic Norwegian city of Tromsø heave with Canadian literature ranging from Anne of Green Gables in Norwegian to English editions of books by Margaret Atwood and Emily Carr.

Bjørhovde has now decided to turn her passion into a book project that explains Canada to Norwegians, encompassing everything from literature and politics to history and culture. Its publication is planned for 2017 to coincide with Canada’s 150th brithday.

“I really want to draw the attention of Norwegians to what Canada has to offer,” she said.

“We know so much more about the United States. (Norwegians) tend to think of Canada as just the same as the USA which really I felt was not right.

“(Canada) is a country and a culture that we have a lot in common with in Norway and that people should know more about.”

Canada: Re-reading the landscape – The importance of northern books, Eye on the Arctic

Greenland:  Canadian artist explores Greenland’s past, Eye on the Arctic