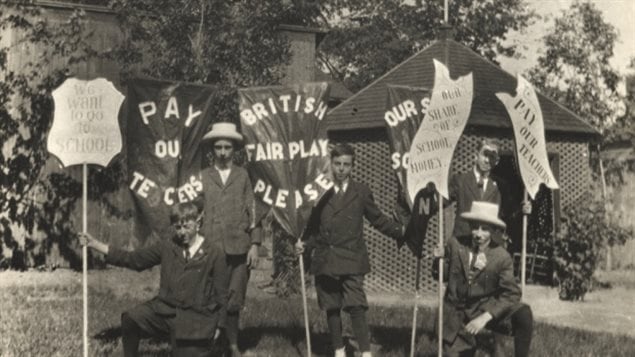 French-speaking children protested Regulation 17 which virtually banned the use of French in schools in Ontario between 1912 and 1927.
Photo Credit: Société historique du Nouvel-Ontario

Leader to apologize for historical ban on French

Although it happened a century ago, some citizens say a virtual ban on French in Ontario schools is still “a thorn in the side” of French-speakers in that province. Now, the premier of Ontario, Kathleen Wynne will issue a formal apology but not pay reparations.

At the national level, Canada is officially bilingual, having been colonized by people from France and England who first arrived in the 15th century. Many of the French settled in what is now the province of Quebec. That province’s official language is now French.

There are also French-speakers living in Ontario, New Brunswick, Nova Scotia and in other provinces as well. Many have struggled to maintain their language in provinces which are mostly English-speaking. An association in Sudbury, Ontario lobbied hard to get an apology over that province’s Regulation 17.

That regulation severely restricted the speaking of French between 1912 and 1927 in schools with very few exceptions. Some teachers defied the rule and hid French texts when school inspectors came by. Others set up what they called resistance schools where French was spoken in defiance of the rule.

The premier is expected to acknowledge the regulation was unfair and that it did not recognize the importance of the French language and its contribution to culture.